One of my must have buys with a new baby is a play gym.  As babies gradually start to gain interest in toys a gym in the perfect play to lie them so they can see the bright colours around them.  For me the brighter the better.

We had a play gym for O and we dug it out of storage when G came along.  Sadly it looked a little worse for wear as I started to remember how we had lost several of the toy attachments as we had taken them off for O to play with separately.  When I was offered the chance to review the Fisher-Price Rainforest Deluxe play gym I was delighted.  G is just starting to take an interest in toys and the timing could not have been more perfect. 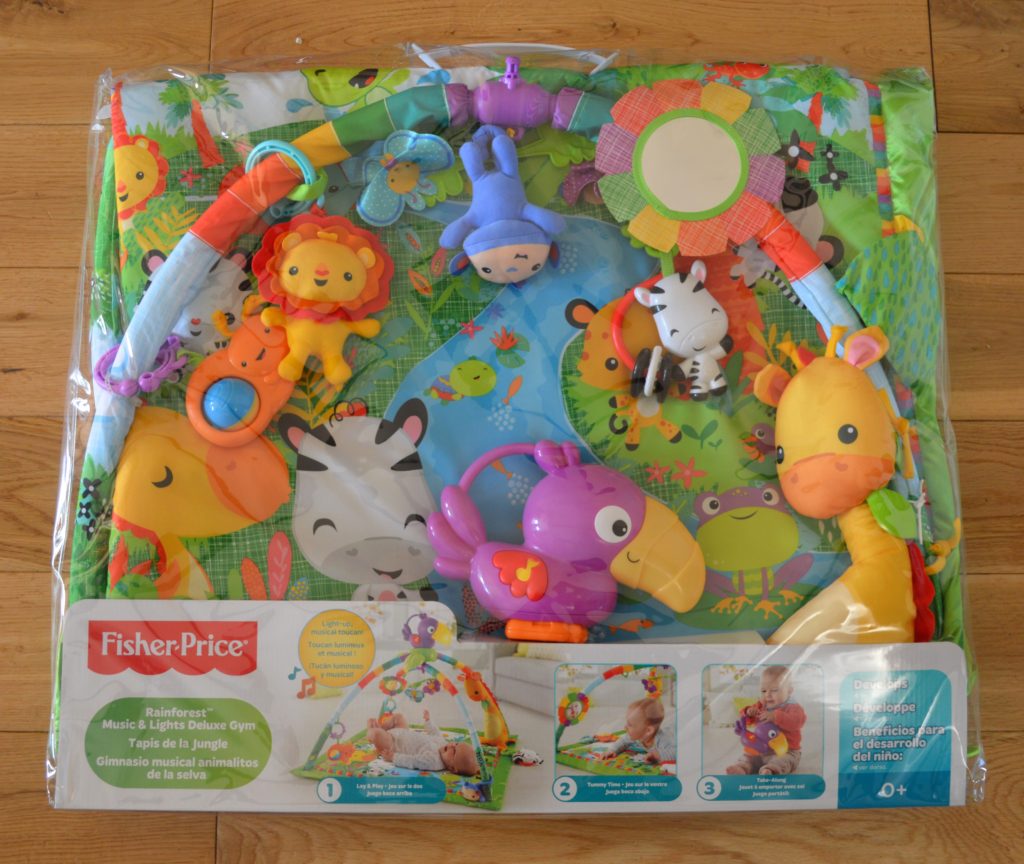 The gym arrived and it looked great.  Lots of bright colours and lots of toy attachments.  My first impression when taking the gym out of the packaging was that the mat seemed a bit small, but I put that to one side for a minute and put the rest of it together.

It was very easy to assembly and the musical toucan that sits on top is an extra bonus. As baby gets older this can be taken off and played with separately.  We’re not at that stage yet but G loved the music and sounds that it makes, as did my 4 year old too!

There are 8 moveable activity toys that come with the gym which can be placed high for younger babies to look at but they can also be moved to lower parts of the gym to encourage older babies to reach out and grab them. 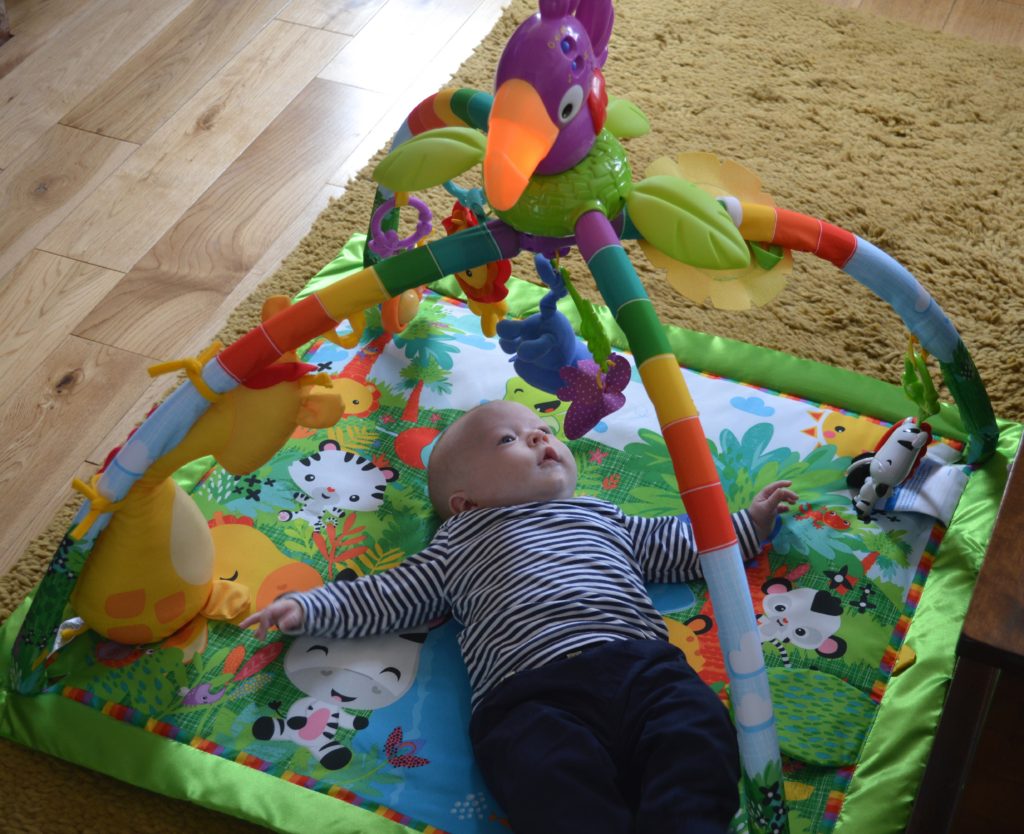 One of G’s favourite things about the gym is the mirror, he loves to look at himself and I liked that it gave a good quality reflection, and that it was big enough so he could see his full face. 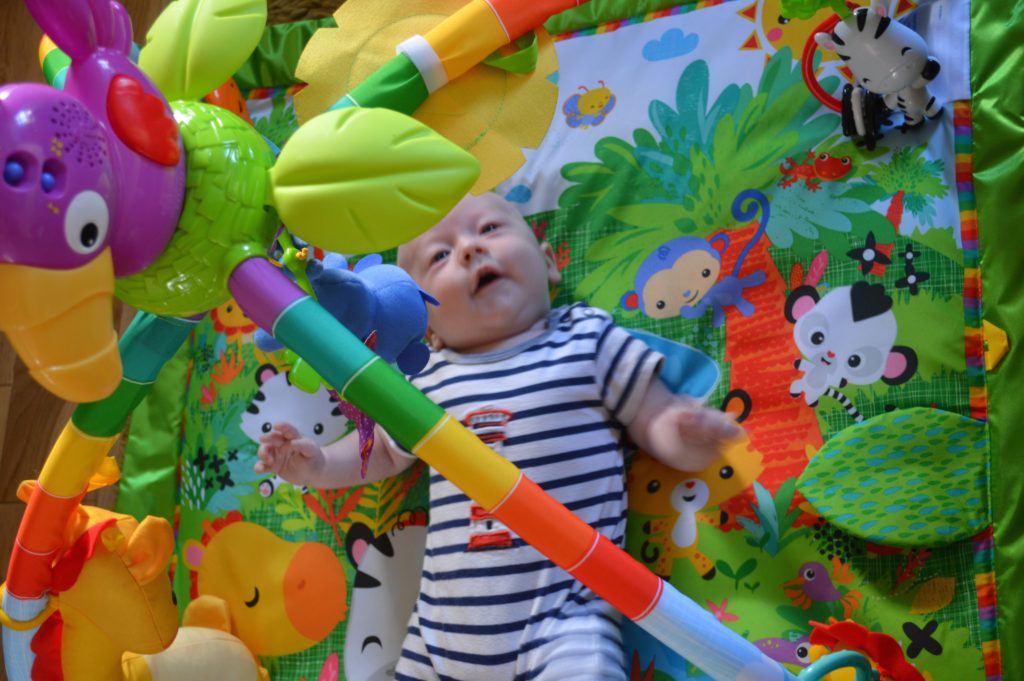 On the mat itself there are also parts to keep babies interest, such as the leaf that crinkles when you grab it.  G is still mostly at the staring at the toys stage but there are so many different ways that this gym will grow with him and keep him amused.  As he gets older he will be able to reach up for the toys and play with the giant giraffe (well, giant for a 3 month old). 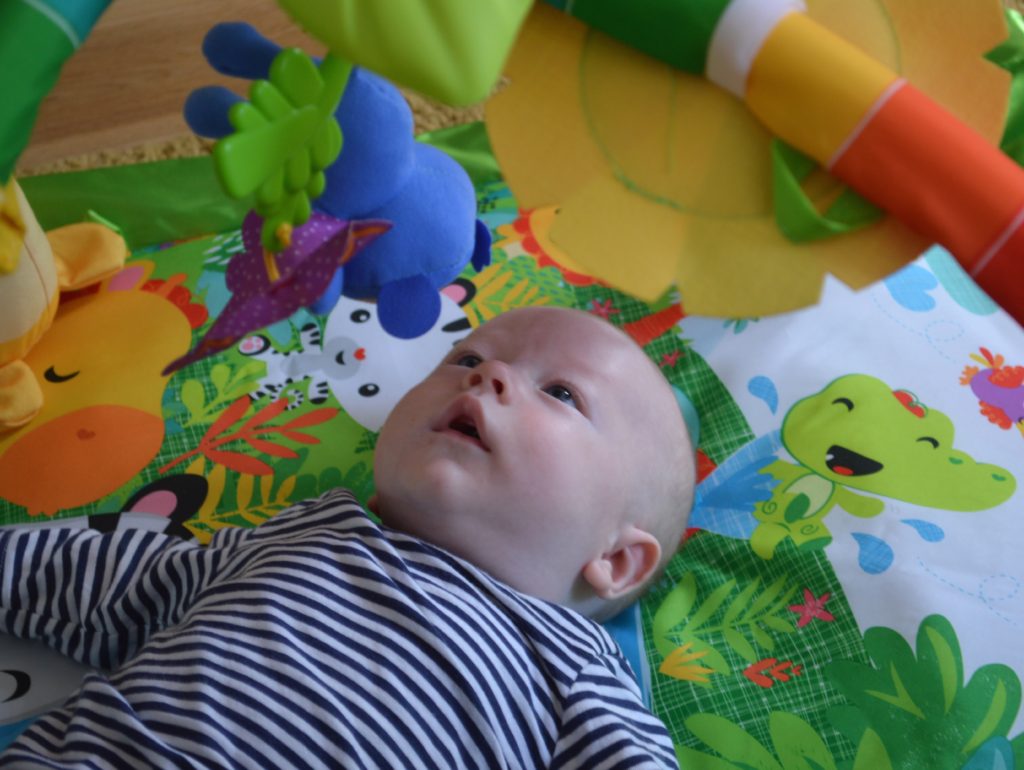 My only concern was the size of the mat, I think ideally it could be a little bit bigger, but it’s size has meant that G has found a little game of his own which he loves to play.  By laying him diagonally on the mat he discovered he could kick the bars and it would make the gym and the toys shake.  On a larger mat he wouldn’t be able to reach to do this so it’s small size does have some advantages.

I have been really impressed with the Fisher Price Rainforest Gym, it has kept G happy so I can tidy the house around him and the way in which he will play with it will develop over time. In the past few days he has just started to grab for toys on his bouncer so I don’t think it will be long before he is doing that here.  I would say that if you were placing this on a hard floor you would probably need a mat or towel underneath as the padding isn’t that thick.  I’ve placed it on our rug and that has been fine.

The gym has been a hit with my little man and as it isn’t huge, it can be easily moved away at the end of the day so it doesn’t dominate the living room.  The key features for me are the number of additional toys and the noisy toucan.  With these baby is not going to get bored any time soon.

Disclosure: I was sent the Fisher-Price Rainforest Deluxe Gym for the purpose of this review but all thoughts and opinions are my own.