Knowing what to buy for a one year old is hard.  They can’t tell you what they want and whilst you can try your best to guess they are unpredictable in the toys they will love and the ones that will be left untouched in the bottom of the toy box.

I find it even harder second time around as G often wants to play with O’s toys which are sometimes a little too old for him, plus we already have so many toys that being completely honest there isn’t much we don’t already have.  However saying that, we don’t have train sets.  O loved cars and planes as a toddler but was never very interested in trains.  G is different.  He loves trains, especially Thomas, and when we were contacted and asked if we would like to review a Thomas and Friends Playset I was immediately excited when I thought of seeing G’s face when he got to play with it. 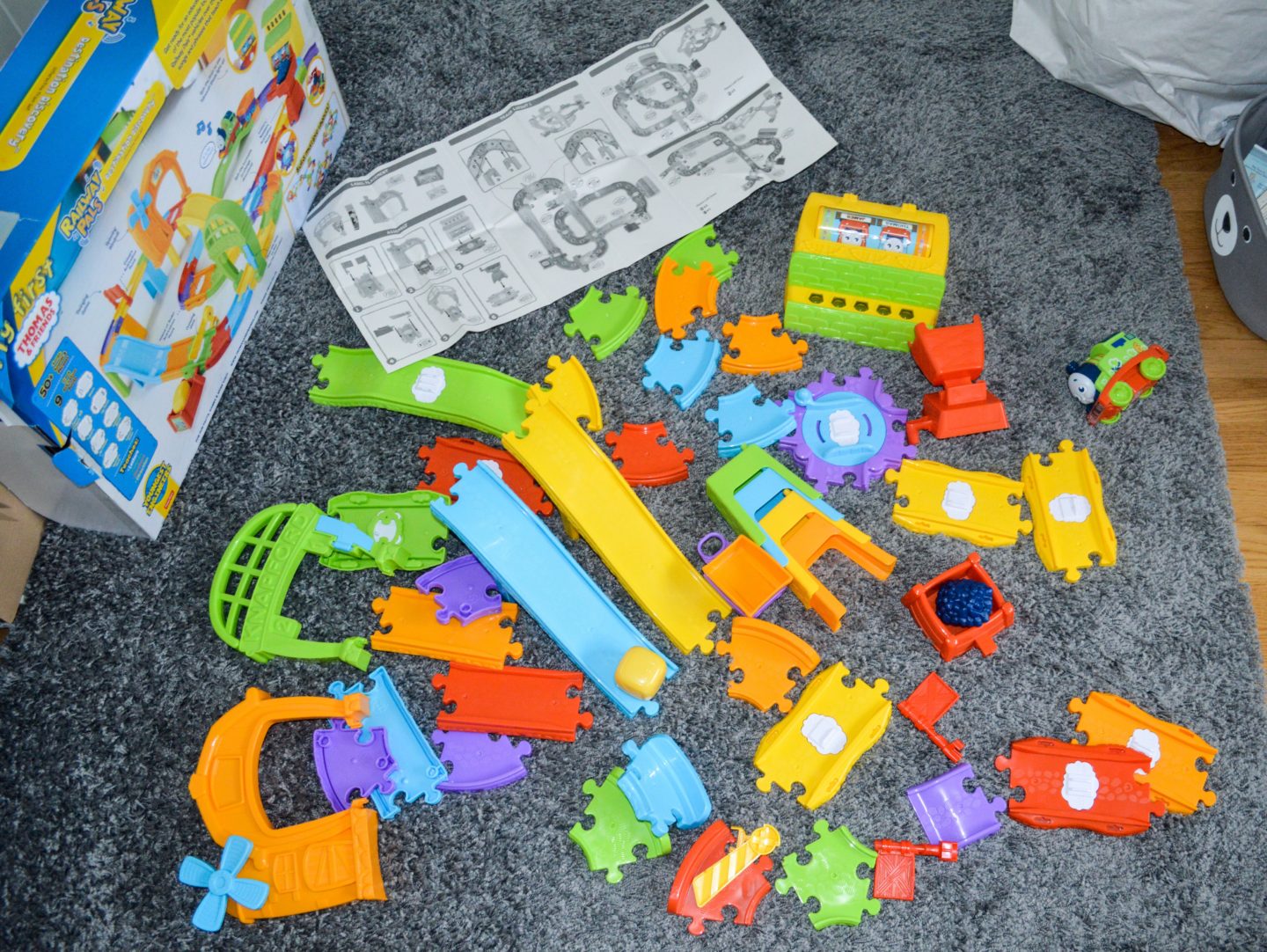 As it comes in many, many different parts I decided to set it up whilst G was out of the house so that he could come home to a completed track.  I think trying to build the track with an inquisitive one year old in tow would have been a little too much like hard work.  The amount of pieces was a little daunting but they were all labelled on the bottom and with the instructions to follow it didn’t take too long to have it up and running. 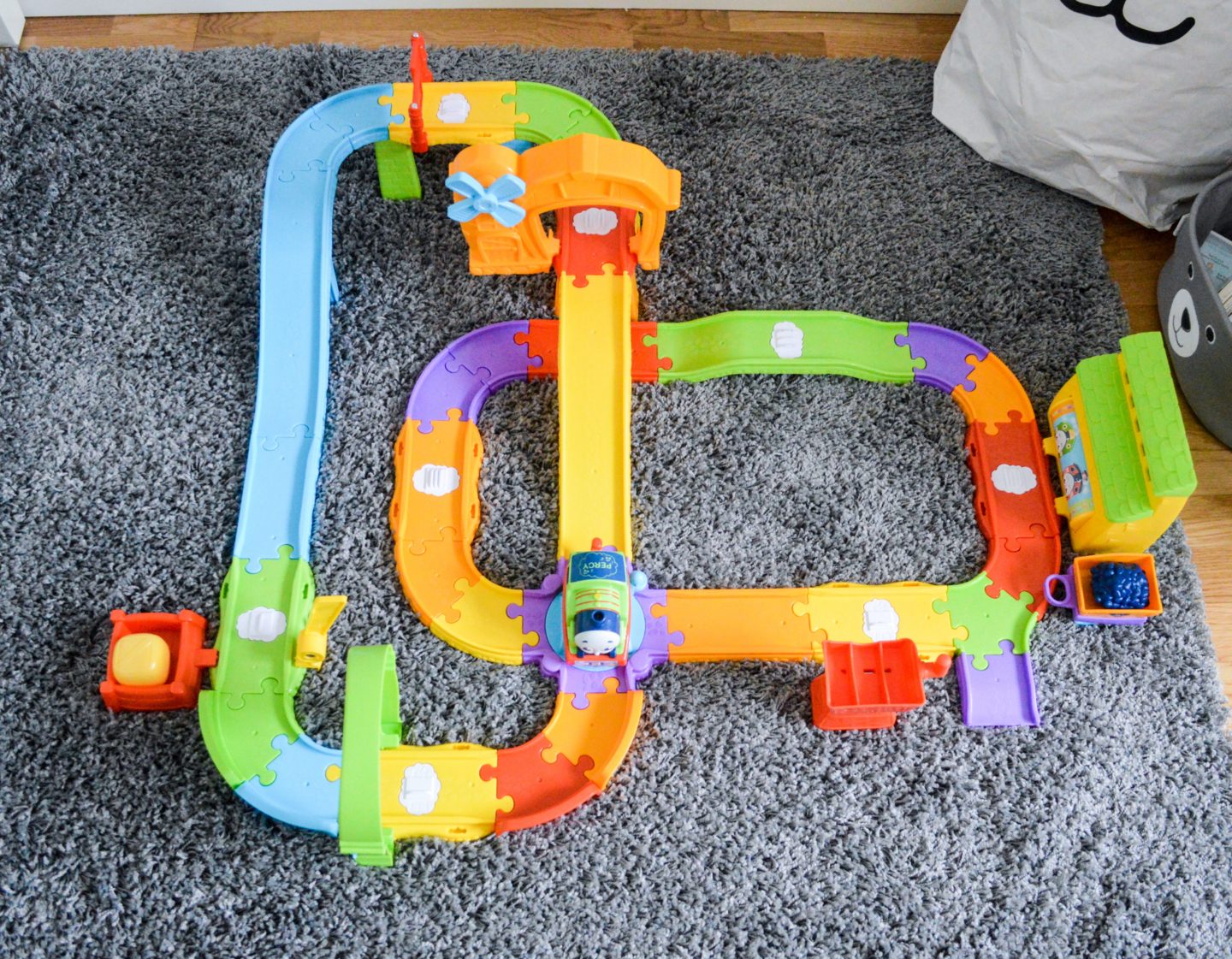 There are three different tracks that you can build according to the instructions but you could also make up your own if you feel like it, and you can also buy different sets that can link up to this one to make even bigger tracks if that’s your thing. 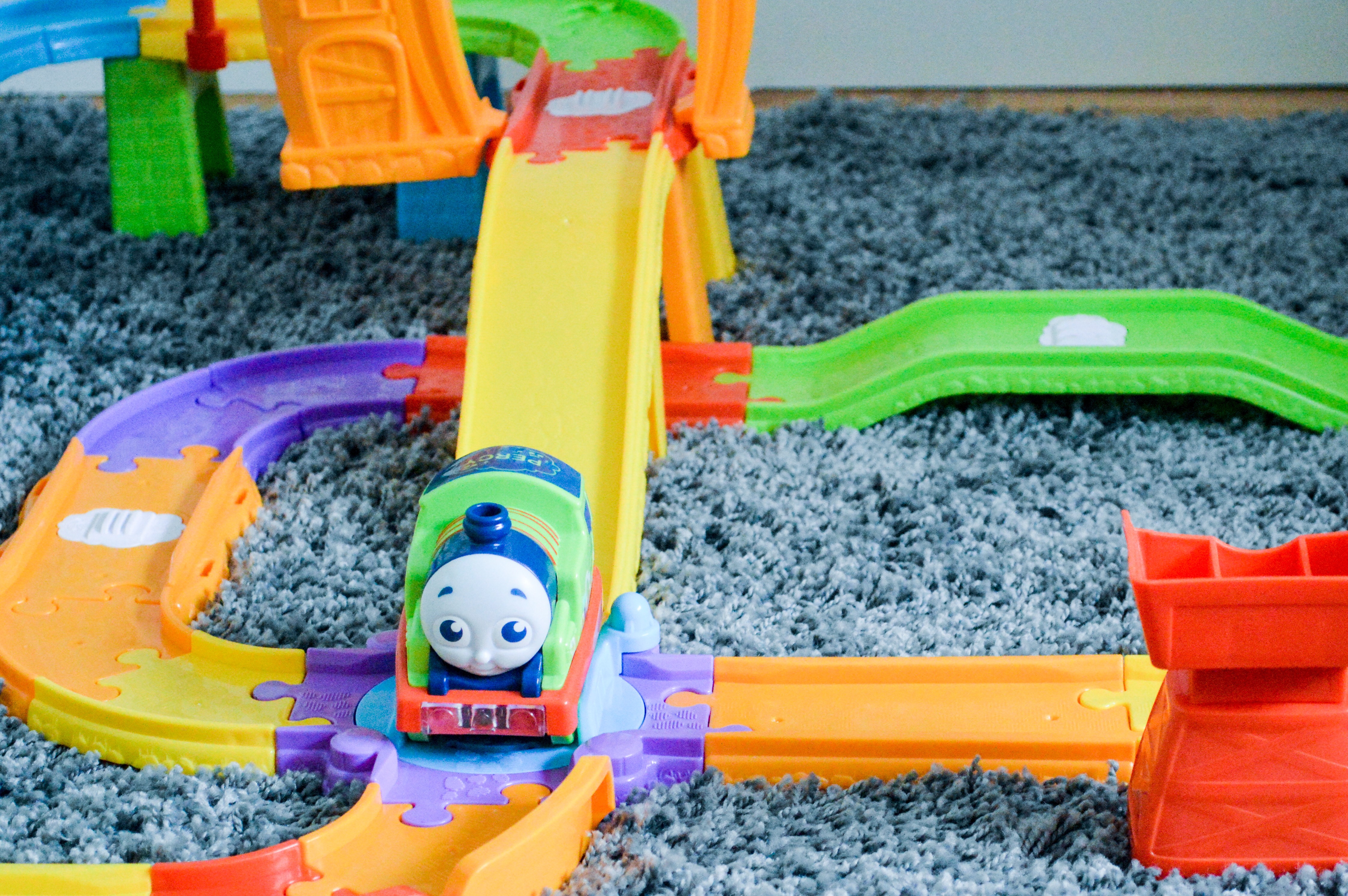 As soon as G saw the train track his face lit up, and chatted “choo chop” over and over as he trotted around upstairs with the train in his hand.  He proudly showed it off to us all and loved pressing the buttons on the bottom that would make it talk to him.

One of the features of the track is that there are different grooves on some of the adjoining pieces which press varying combinations of buttons underneath the train resulting in different phrases and songs being spoken, I really like that it allows for more variation rather than just one or two. 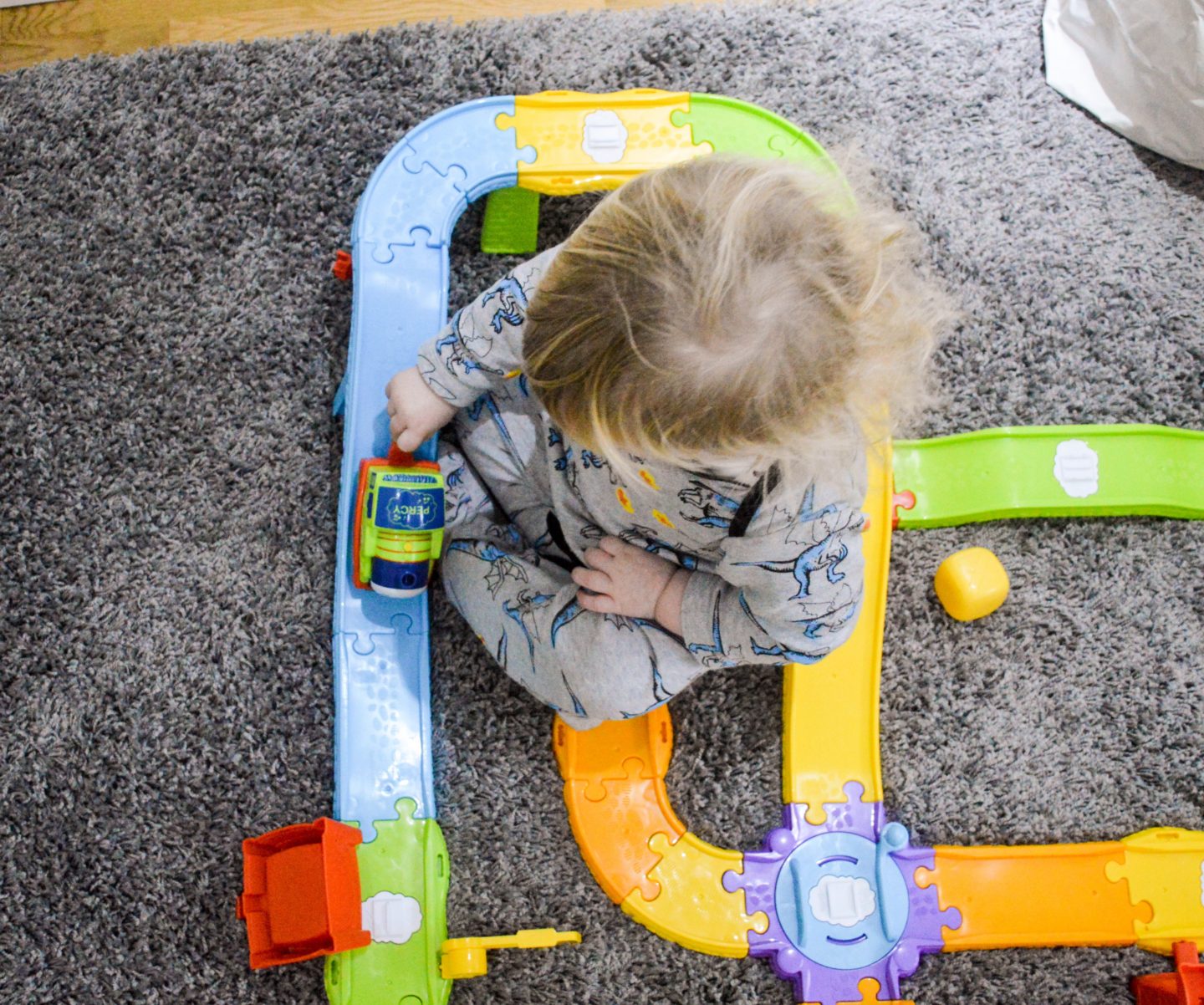 O was always a very gently toddler whereas G is anything but and one thing he loves doing is sitting in the middle of the track as he pushes the train along.  I was a little worried how well it would hold up but all good so far, even with G crawling all over it.  Some of the features that are clipped onto the sides of the track fall off a little too easily but not so that they distract from the fun of pushing the train along. 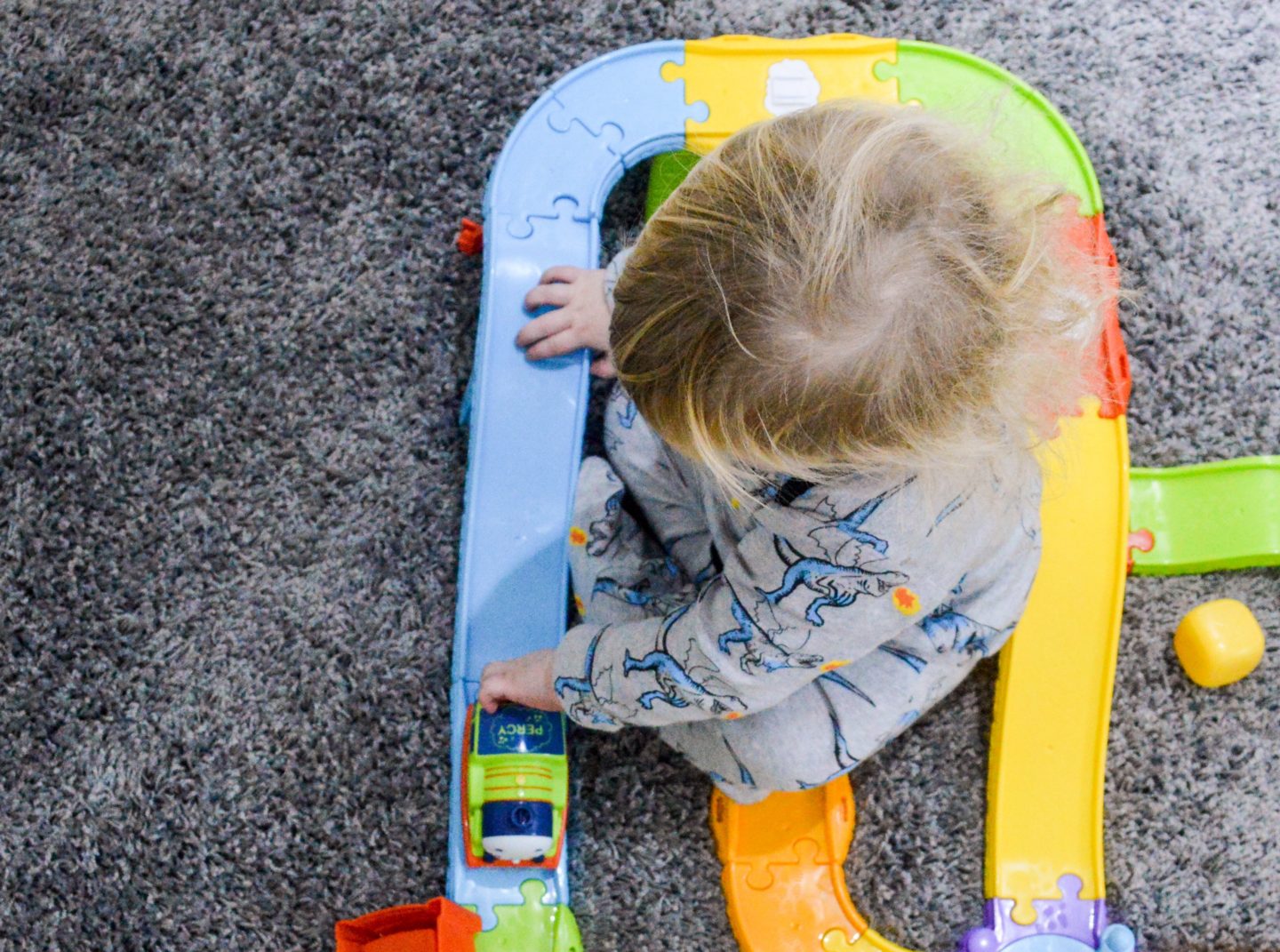 One of G’s favourite parts of the track is the ramp going down.  He will sit for ages pushing the train down before picking it back up and repeating over and over again.  Seeing how much fun he has had makes be want to try out the other track designs to see what he thinks of those, but I’ll save that for when I think he might like a change of route. 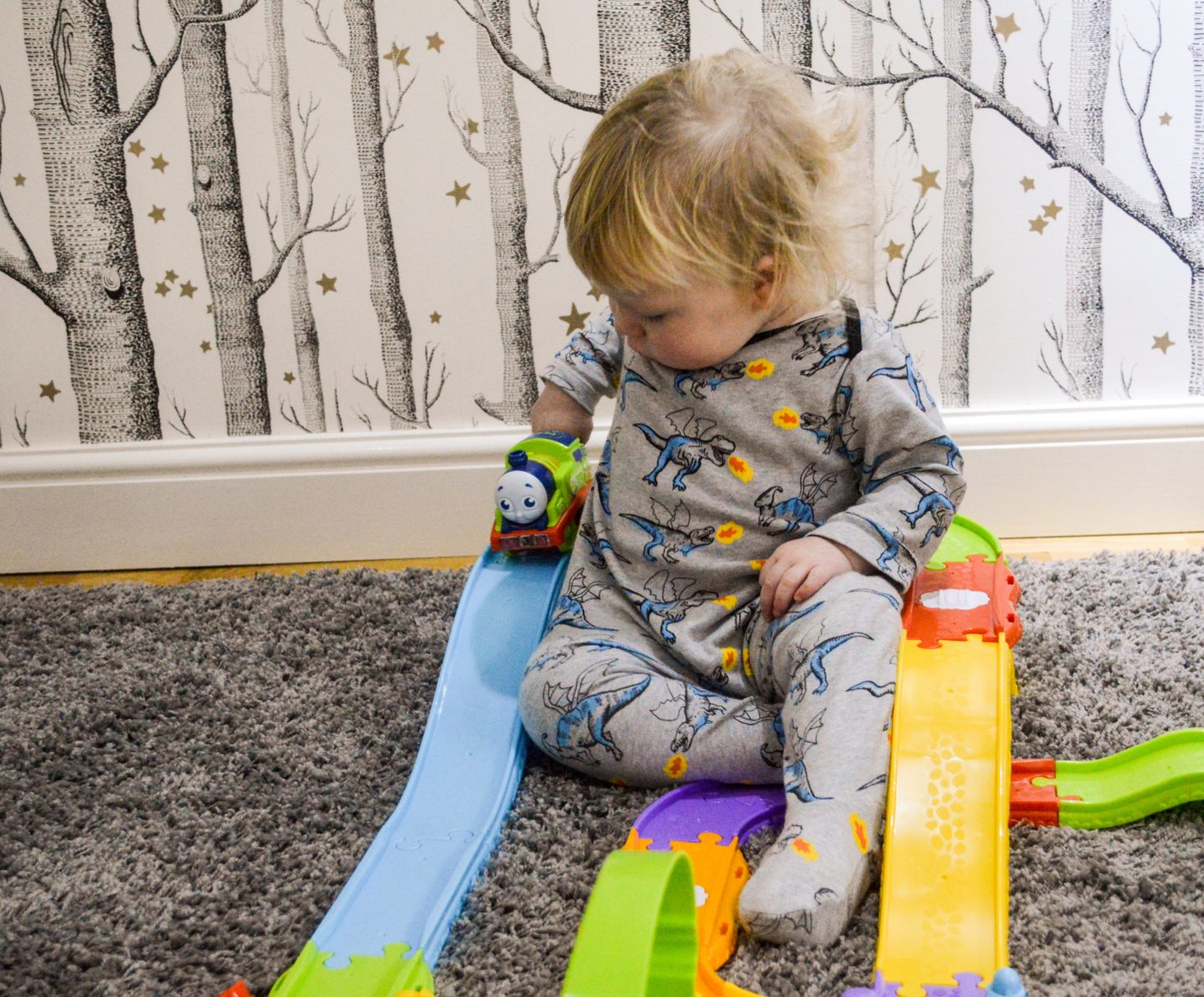 I’m always very wary of buying big value items for my children, and I think this starts to fall into that category, as I am never sure how well they will be received. My eldest was always much happier with a 99p car than anything “big” and so many expensive presents have been left almost untouched.  I love that G got so much enjoyment from this set and I think it will be one of his favourites for a long time to come.

Disclosure:  We were kindly sent this train set for the purpose of this review but all thoughts and opinions are my own.