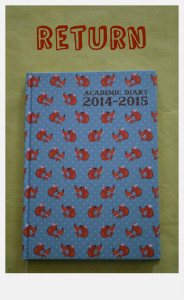 Normally at the end of the summer holidays a part of me is ready to return to school. There’s a feeling of excitement about the new year ahead and the chance for a fresh start.

This year that feeling isn’t there. I feel nervous about returning on Monday and a little teary at the thought of going back to “normal” life.

I’ve been sat trying to pinpoint exactly why I’m not looking forward to returning to work:

Maybe it’s because I didn’t get as organised as I would have liked at the end of last term and I know I’m returning to a bit of semi- organised chaos.

Maybe it’s that the thought of another year with the threat of Ofsted hanging over us and the pressure for results is sucking the joy out of the job.

Maybe it’s because I’d hoped to be starting the year on maternity leave or at least with it on the horizon.

Maybe I’m a little apprehensive about the mixture of classes I have and that as I’m now four days a week I share every class bar one. I still don’t like sharing my classes, especially with colleagues who fail to communicate!

Maybe I’m feeling a little bit cheated because instead of the normal 6 weeks, we’ve only had 5 weeks and 2 days (Okay, I know I’m being a bit cheeky with this one!)

Maybe I’m dreading the tiredness that comes from working in a job where the vast majority of it is spent on my feet, moving from classroom to classroom, carrying all the resources I need for the day around with me.

Maybe it’s because I’m dreading the inevitable scene on Tuesday morning when I drop O off at nursery and he cries that he wants to stay with Mummy and I have to walk away, back to my car, with tears in my eyes.

Maybe it’s that when it comes down to it I want to be the one to look after O every day and be there for him whenever he needs me.  The past 5 and a bit weeks have been wonderful and I will be missing my boy so much next week.

In all honesty, it’s a combination of all of these things and as we inadvertently drove past my place of work earlier today I could feel my stomach tighten.  This time in a week I’m sure I’ll be back into the swing things and it won’t seem so bad but right now I’m dreading Monday morning and the return to work.