Before becoming a parent the thought of weaning hadn’t really entered my head.  I would worry about giving birth, whether I would be able to breastfeed, the lack of sleep, but in all the weird and crazy thoughts that pop into your head in the middle of the night, weaning was never one of them.  However, once O was born it began to concern me.  It was the one thing that I really began to stress over.  I went to our local baby group weaning sessions, I read up on it, waited until O six months and then began with the customary baby rice.

I spent hours pureeing apples, carrots, sweet potatoes and any other fruit or veg that could be pureed.  I had a chart in the utility room to track which flavours he liked and disliked (avocado was not a hit).  I worked my way through Annabel Karmels baby cook book, trying out a variety of recipes.  I was so sure that my son would only eat home cooked food, pouches and jars were not an option.

We started off so well, he seemed to enjoy his food and then we hit a road block.  He started to refuse my food, the tomato beef I had made sat in the freezer for months, and he began to spit out the food I was giving him.  I remember sitting one day in front of him in his high chair sobbing because I couldn’t get him to eat.  The thoughts running through my head were that what he ate in his first year would set up his food habits for life, and I was failing him.

In desperation I bought a few Ella’s Kitchen pouches and he loved them.  In fact, for a few months they were all he would eat.  I felt guilty that he wasn’t eating home cooked food and panicked that this was all he would eat.  Of course, that was never going to b the case.  As he grew older he started to want more food but with the lack of hindsight it can be such a scary time for a first time parent.

As weaning wasn’t really a positive experience for us first time round I lacked confidence thinking about it for G.  Over the summer I was invited to an event from the lovely people at My Little Piccolo to discuss weaning and to see their range of products.  At the time G was only 8 weeks old and weaning was a long way in the future but I was grateful for the opportunity to have a chat with people who knew what they were talking about.  The ladies from My Little Piccolo couldn’t have been lovelier and made me realise that weaning should be something to look forward to rather than dread.

G is such a different baby to O.  We would often struggle to get enough food into my eldest, but G is a food monster.  He loves his feeds and I’ve already seen him eyeing up what we are all eating.  I didn’t start weaning O until a few days before his six month birthday but we had said from quite early on we don’t think G would wait that long.  With those thoughts in mind we started G with a few mouthfuls this week.

For the first couple of days he had baby rice mixed with fruit puree, some shop bought, some home made.  I feel so much more confident in introducing flavours early on and not giving him the plain baby rice on its own.  It didn’t take him long to figure out what to do with the spoon and he even started to get a bit stroppy if he thought I wasn’t feeding him quickly enough.

Over the weekend we tried him with his first My Little Piccolo pouch (we used the Apple, Banana and Blueberry one) and he loved it.  Watching his little face light up with the taste cleared any doubts in my head that we had started too early.  We’re only having a few spoonfuls a day at the moment, usually around lunchtime as with O at school it’s a calm time of day for us, but I’m starting to get excited each day to see how he will react to the flavours.

It makes me a little sad when I think how uptight I was with O when we started feeding, and that makes me even more determined to enjoy it the second time round.  Yes we will be using pouches (and not feeling guilty about it) and I will also be pureeing some fruit and veg of my own.  We will soon be introducing finger foods and letting him discover the new textures that come with those, and I can’t wait! 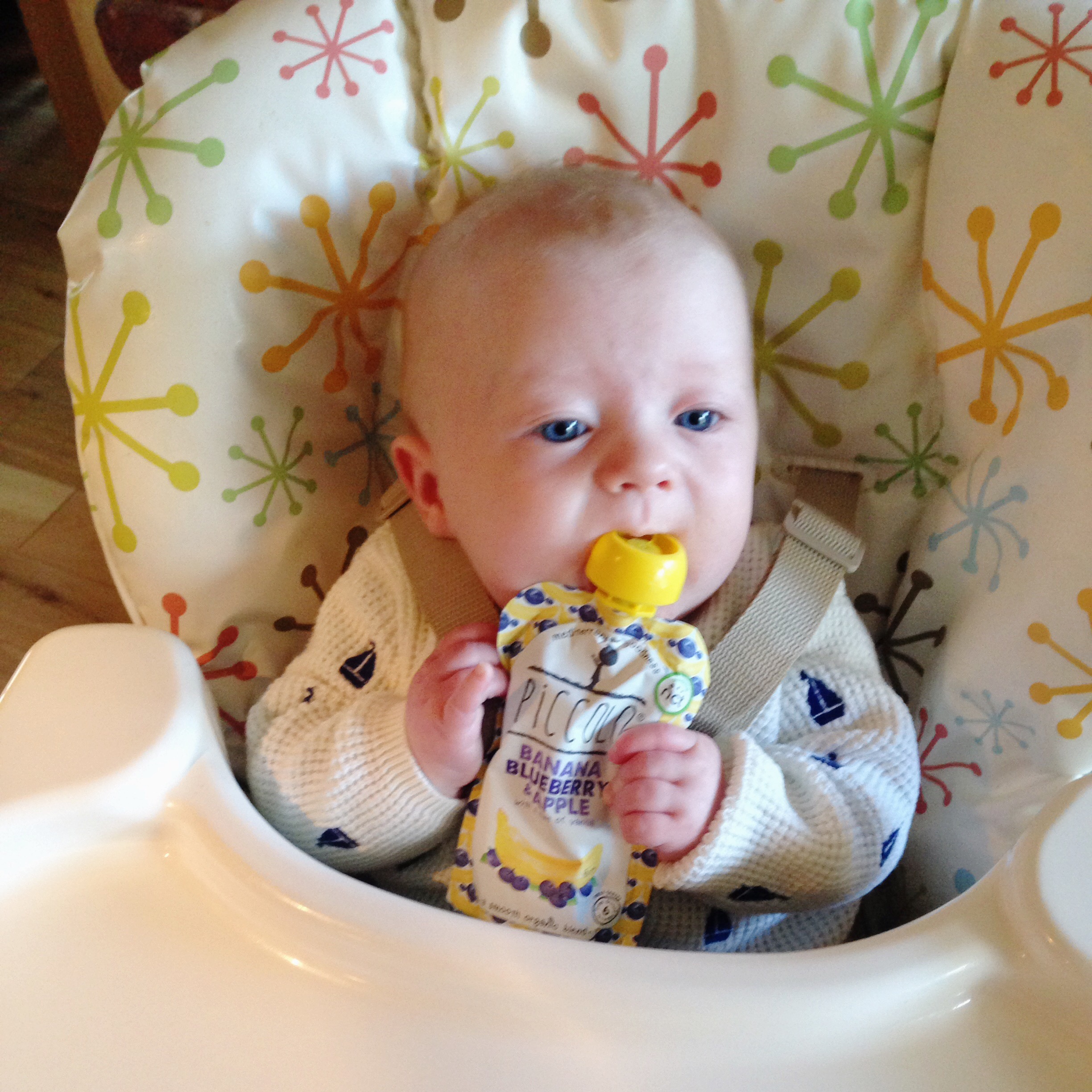 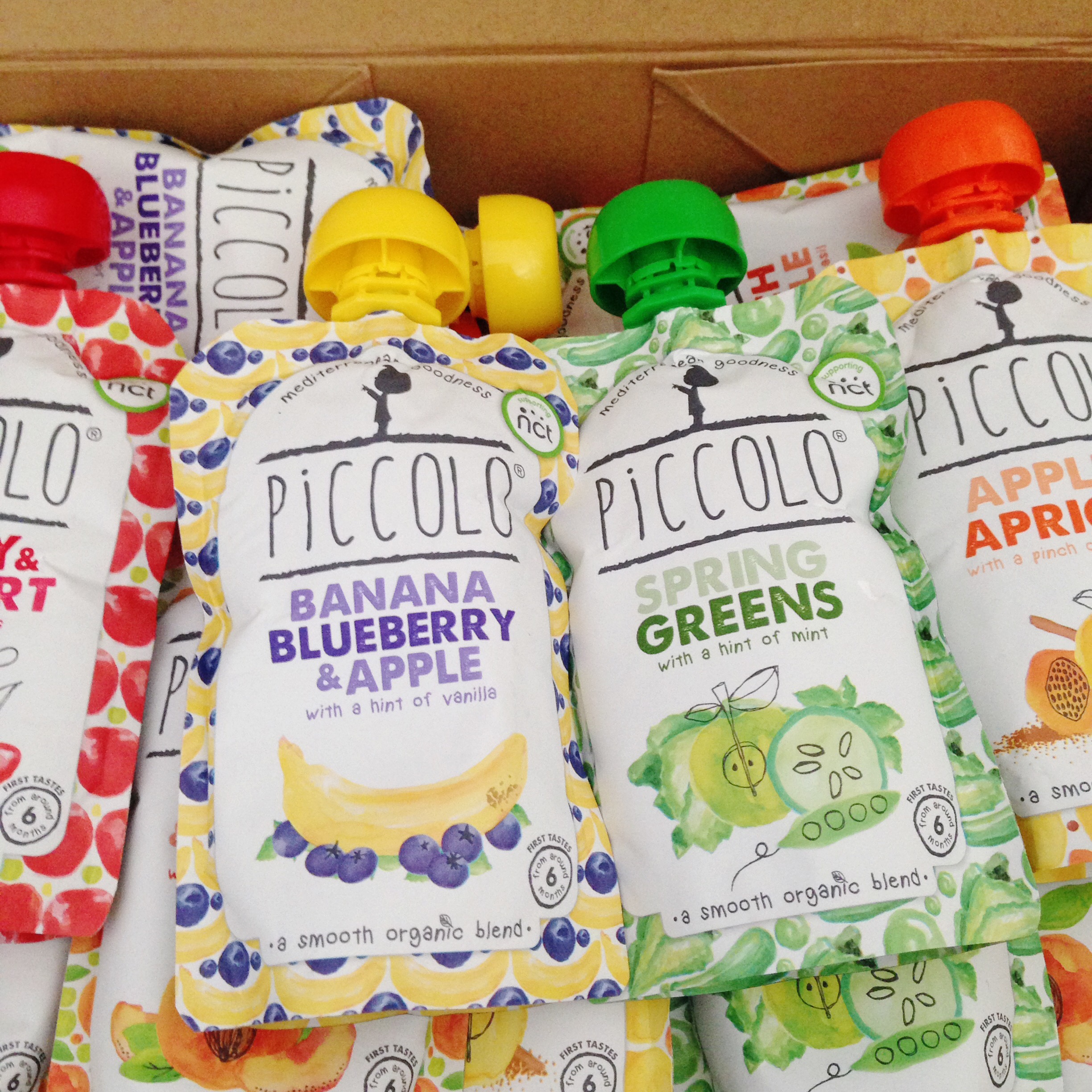 Disclosure:  We were sent a hamper of the My Little Piccolo pouches and a full review will follow once we’ve had the opportunity to test the full range.