We are six weeks into the extension and a lot is going on outside to build the framework of the new part of the house but it probably isn’t too exciting to anyone apart from us.  Instead of more pictures of bricks, I’m going to share our designers images of what the end product will look like.

We have always dreamt of the large kitchen/dining/family space and I still can’t quite believe we are only a couple of months away from it being a reality.  When we first started talking about the design it was really important that it was a space that would work for us as a family, somewhere we could all be without feeling on top of each other and a place that would grow with us as the boys get older.

Their are a few tweaks that we will be making along the way but this is the look we are going for. 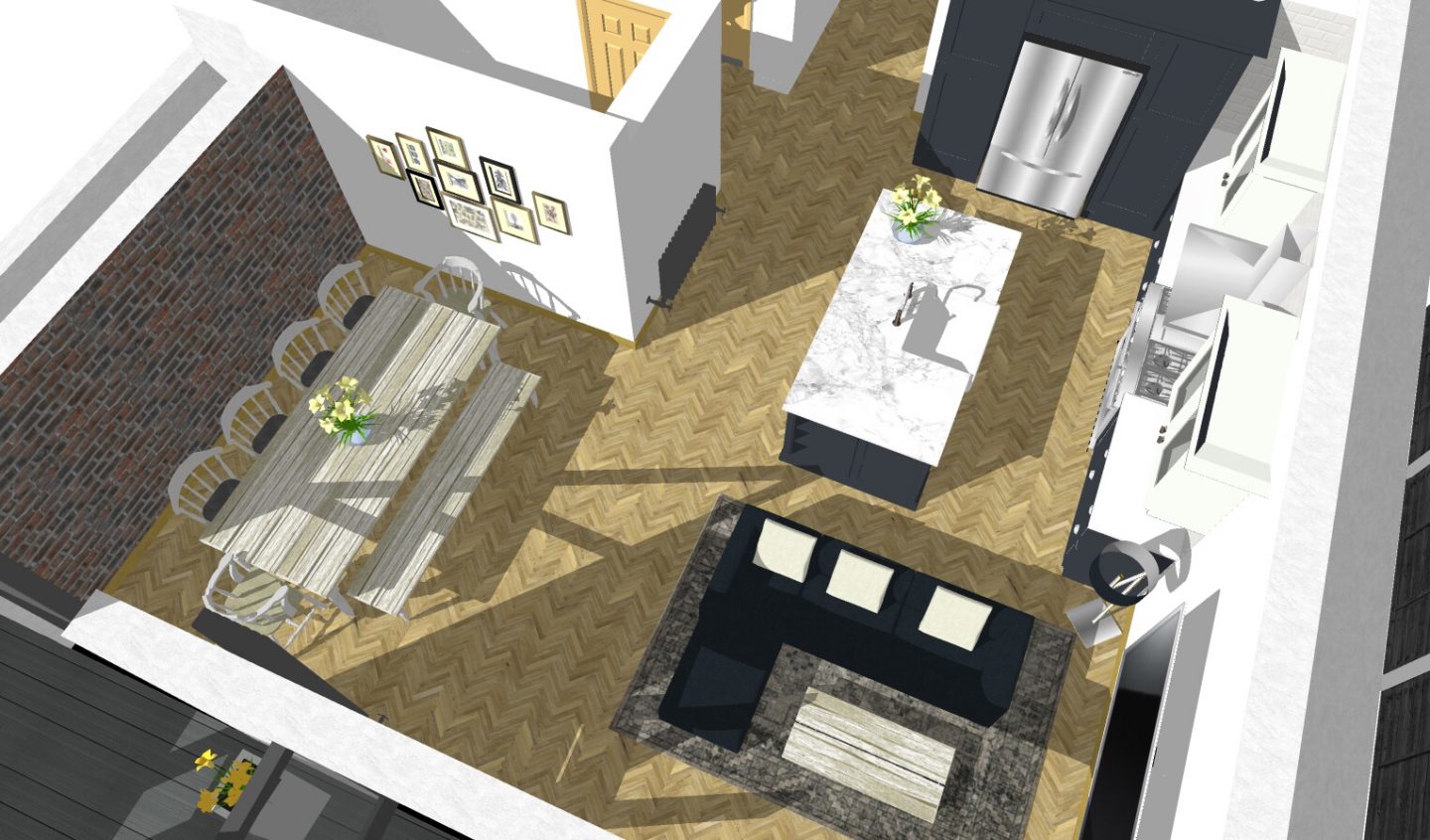 The dining table will be smaller than this as the original 10 seater we had planned looks a bit tight in the space (I can’t say I’m too disappointed, the big table was my on my husbands wish list rather than mine). 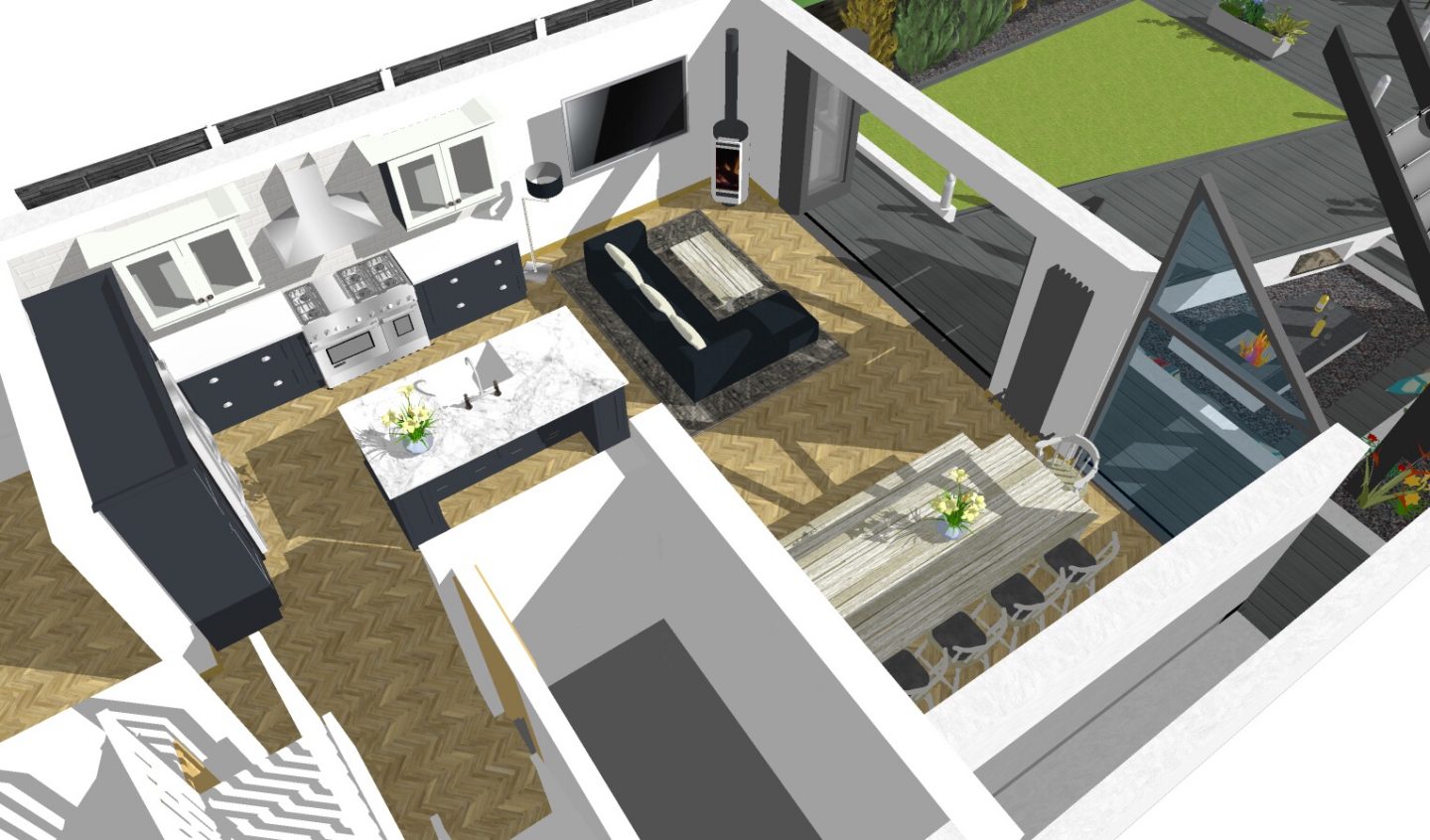 The biggest risk for me is the deep blue kitchen, it is completely out of my comfort zone but after spending hours on Pinterest I was drawn to those designs every time, they were beautiful.  I’m keeping my fingers crossed I love it as much in our house. 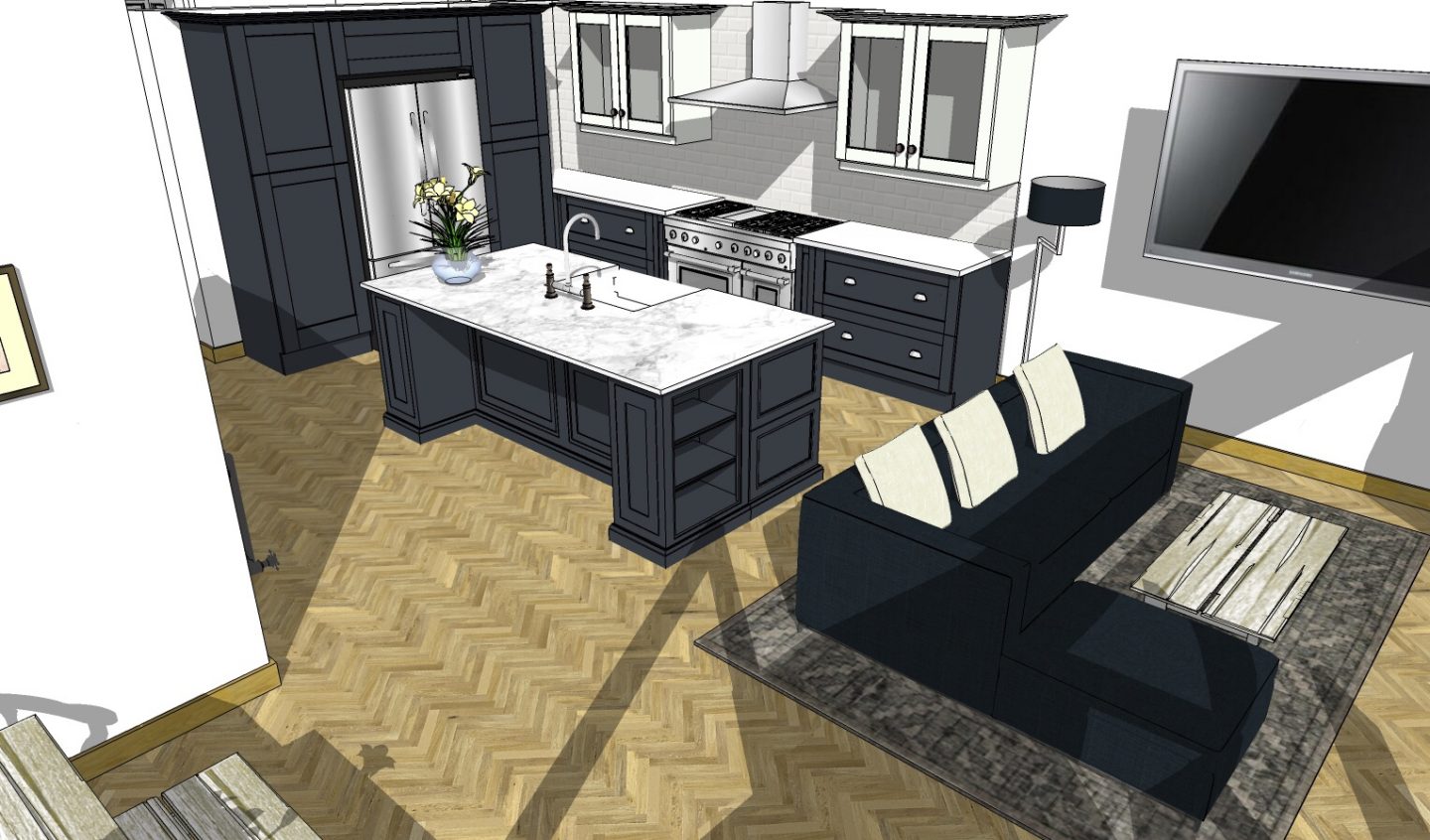 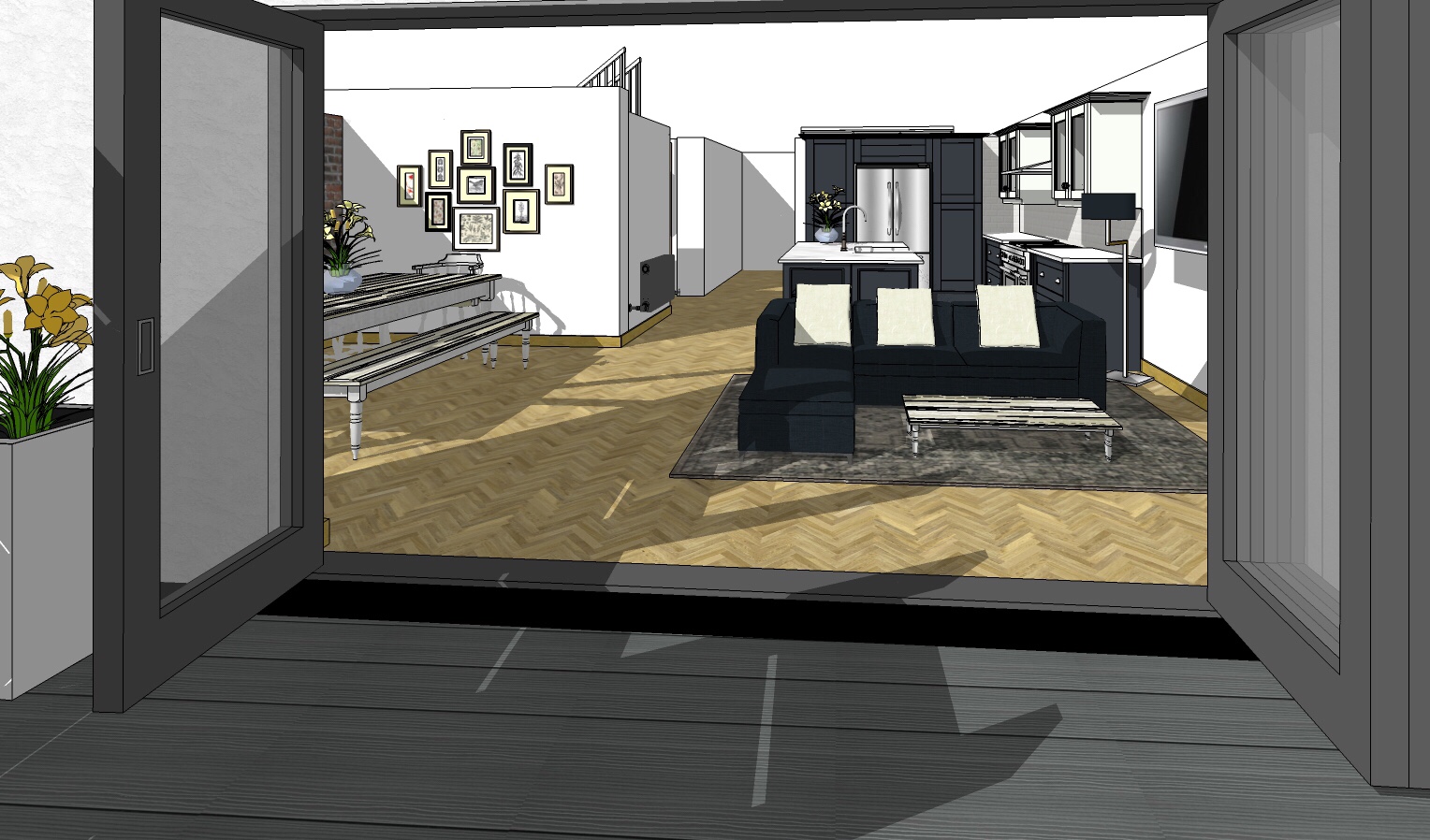 One of the main focuses on the design has been to make more use of the garden.  Despite having quite a large garden the only access to it was through the small kitchen door which didn’t open fully because of a blind.  From the house you couldn’t see the garden unless you were stood at the kitchen sink.  I don’t think you can miss seeing the garden now!

We also wanted to make the garden a usable space for us, previously the only seated area was in the middle of the garden which was never very practical if you just wanted a cup of tea in the sunshine, especially if the boys were inside, it was too far away from them to be able to relax (or hear G if he was napping) so it didn’t happen.  We will still have some seating space further down the garden because that’s where the sun is later in the day but we are having a seated area, with a fire pit just outside the back of the house which I think will get a lot more use. 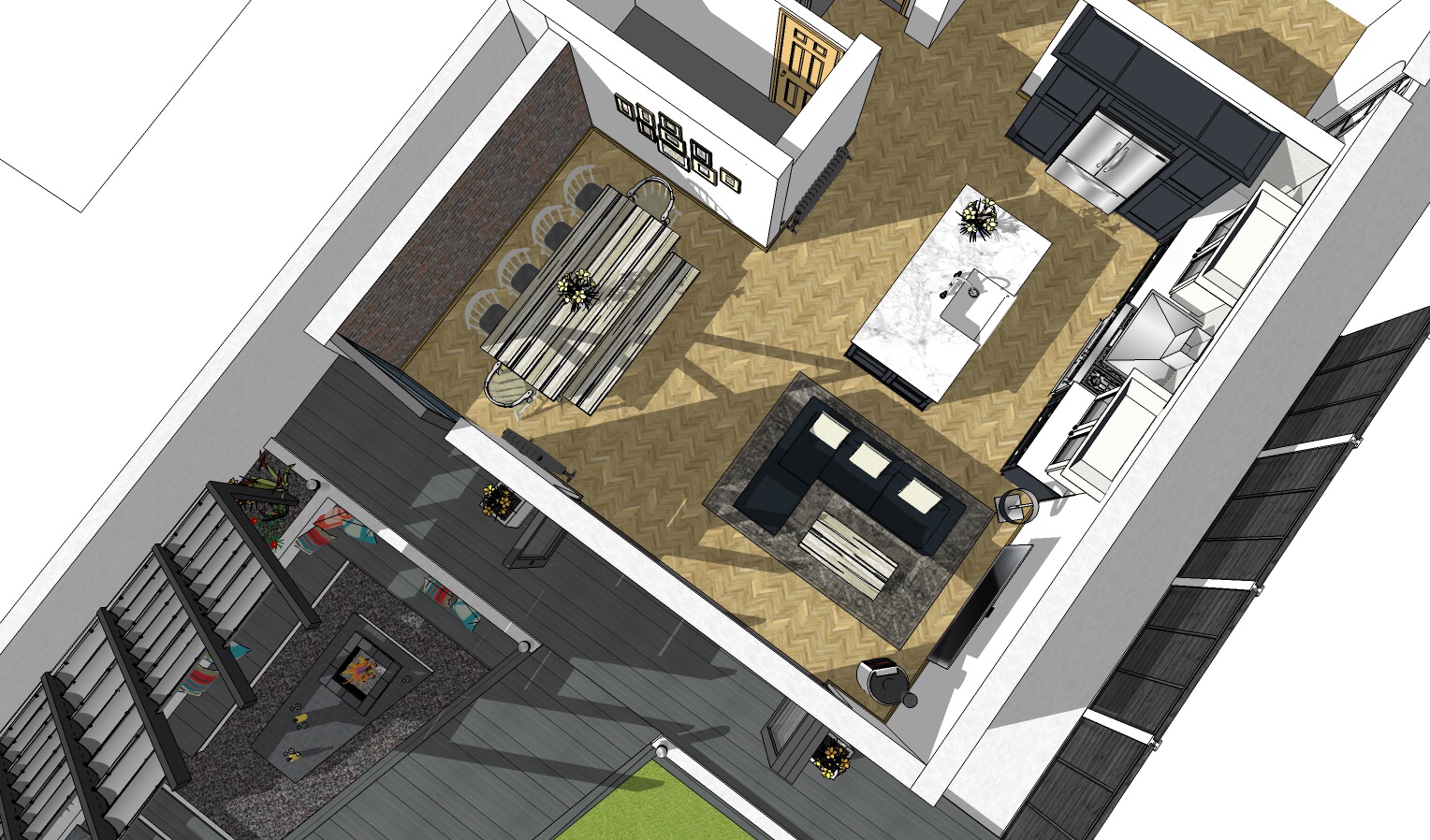 It does feel this is still months away but we are hoping to be complete by the middle of May (G’s birthday at the latest), and by the time my summer holidays start I’ll be able to fully enjoy our new family space.