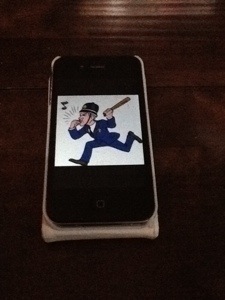 Over the past 10 years one of the biggest problems to creep into the classroom is the rise of the mobile phone! When I first started teaching it wasn’t a problem, hardly anyone had them, and if they did they stayed in their bags, on silent.

But then came the introduction of the smart phone and with it Facebook, Twitter and more recently Snapchat. For the record, I still have no idea what Snapchat is, but I hear the young ‘uns talking about it, so it must be the latest in thing!

I’ve lost count of the amount of incidents I’ve had to deal with following the aftermath of a Facebook argument. But she posted this and he commented that and then her mum got involved and told her she’s a bitch so now we’re not speaking and I hate her! Arghhh!

Now they all have them, and I mean ALL of them. They can’t manage to bring a bloody pen to school but they all have a £300 iPhone on them. I had to laugh when one year 11 explained to me he didn’t have a calculator but then pulled out his iPad to use in it’s place.

They think they are being sneaky trying to have a quick FB or text check mid lesson. Listen up kiddies, staring down at your lap with your fingers twiddling is not normal behaviour in a classroom so please don’t look so surprised when I’ve clocked you’re on your phone. Oh, and whilst we’re at it hiding your phone under the desk does not make it invisible, I can still see it! This is particularly important to note if you are on the front row!

I spend a large part of my day playing phone police. Ready to confiscate the offending item where it can be locked away in the school office until the end of the day. The look on their face when they realise they have been “caught” is always a picture. How will they survive a maximum of 6 hours without access to their phones? They may have to actually talk to each other, face to face, like they did in the olden days!

Teenagers who have been without their phone for a few hours develop a nervous tick, their arm constantly twitches towards their pocket. Ready to pull out the phone (the one that isn’t there). They have a heightened sense of hearing as they are on high alert for any sound that comes from a mobile phone. They cling onto the tiniest glimmer of hope that their phone has somehow, magically, flown back to them. This almost never happens.

Getting their phone back at the end of the day is better than Christmas. All those texts, FB updates and Tweets to check. If they’re lucky there may even be a voicemail (which is usually from their mum telling them the key is under the mat!). The phone is out of jail and happiness is restored.

Until tomorrow that is!