Throughout my first pregnancy I never had any doubt that it would all end well.  There may have been the tiniest of wobbles on the morning of our 12 week scan but, other than that, I was so confident everything would turn out as it should.  My husband was the worrier and panicked at every stage whilst I was the one to tell him he was being silly.

I didn’t realise at the time what a luxury that was.  I think a part of it was first time pregnancy naivety and being a little unaware of just how much could go wrong, and how often it does.

Last week I wrote about the day we discovered we were pregnant with our much longed for second baby.  Our little miracle.  We spent a week on cloud nine, but exactly a week after seeing those two pink lines we came crashing down to earth.

Morning sickness hadn’t really kicked in and I had been at work, in a wonderful mood with the knowledge of the secret we were keeping.  I’d had a lovely lesson with my Year 10’s and nipped to the toilet before the start of the next.  That’s when I saw what every pregnant woman dreads.  Bright, red blood.

In that moment every dream we had shattered.  My heart raced and my hands shook as I struggled to comprehend what was happening.  Surely, after everything we had been through to get to this point it couldn’t be over in a week.  It just couldn’t.

Luckily I had told my close friend at work I was pregnant and as soon as she saw me she knew something was wrong.  She organised for my class to be covered and sat with me as I tried to process what to do next.  I rang my fertility clinic to ask if they would scan me but they referred me to the local hospital.  As I was only 5 weeks it would be too early to see anything so they told me it was just a matter of waiting to see if the bleeding got worse.

So I went home to wait.  I sat in the school car park and rang my husband, one of the hardest phone calls I’ve ever had to make.  I didn’t need to say much, the words, “I’m bleeding” covered everything and we sat in silence, miles apart from each other, clutching onto our phones, hearts breaking.

The hospital wouldn’t see me without a referral and I had to go to the GP to get this, and then because the pregnancy was in such an early stage the earliest they would see me was in 12 days time.  The longest days of my life.  The bleeding stopped, apart from the occasional spotting, and the pregnancy symptoms started to grow a little stronger.

One thing I’ve learnt is that if you Google hard enough you will find every answer imaginable, some you want to hear, some you don’t.  As much as I hoped I was going to find the magical answer to whether our baby was going to be okay I knew the only thing we could do is wait.  And in the meantime you carry on as normal, life goes on, especially when you have a three year old to look after.

In those days we didn’t talk about the pregnancy, didn’t dare to hope that everything would be okay.  It was easier to push it to the back of our minds.

Hospital waiting rooms are never nice places to be, having spent hours sat in fertility clinic waiting rooms with couples who have hope and sadness in their eyes, an Early Pregnancy Unit has a very similar feel.  The couples who are sat there are there for a reason, and you can feel the fear and hope all around you.

EPU’s are often running late.  I completely understand the reason for this, if you are the one sat there hearing the news you have been dreading the last thing you want is to be rushed out of the room.  I was sat opposite a girl, she only looked young, possibly late teens.  My husband had dropped me off at the door and then gone to find a car parking spot so I was sat on my own, she was sat with her boyfriend who was playing on his phone.  We caught each others eye and smiled, both of us giving a nervous smile.

She was called in before me.  She came out after a few minutes and was directed to one of the small side rooms, she wasn’t clutching a tiny scan photo like the women who had left before.  I could hear her crying as we sat there.  I wanted to get up and go to her, put my arms around her, tell her that sometimes life is a bitch, my heart ached for her.  At the same time I was praying, please don’t let that be me.  Does that make me an awful person?  I felt terrible for even thinking it but I really wasn’t sure I could cope if we got bad news.

We were up next.  I lay on the bed and lifted my top.  I held my husbands hand tightly and turned my head towards the screen, a tiny kidney bean appeared, and a little white flickering light where our baby’s heart was beating.

The confidence that I had in my first pregnancy has been shattered this time round.  Every time I have been to the bathroom I have held my breath for fear of what I may see, I’ve wanted to wrap myself up in cotton wool to protect the precious baby I am carrying.  For the first trimester we were still cautious not to get too excited, just in case something went wrong.

As each day passes, and our little boy gets stronger and I feel him more, I can start to believe this is real.  Although until our son is safely in my arms I don’t think I’ll be able to relax or feel 100% confident.

Keep growing strong little man, we’re all waiting for you! 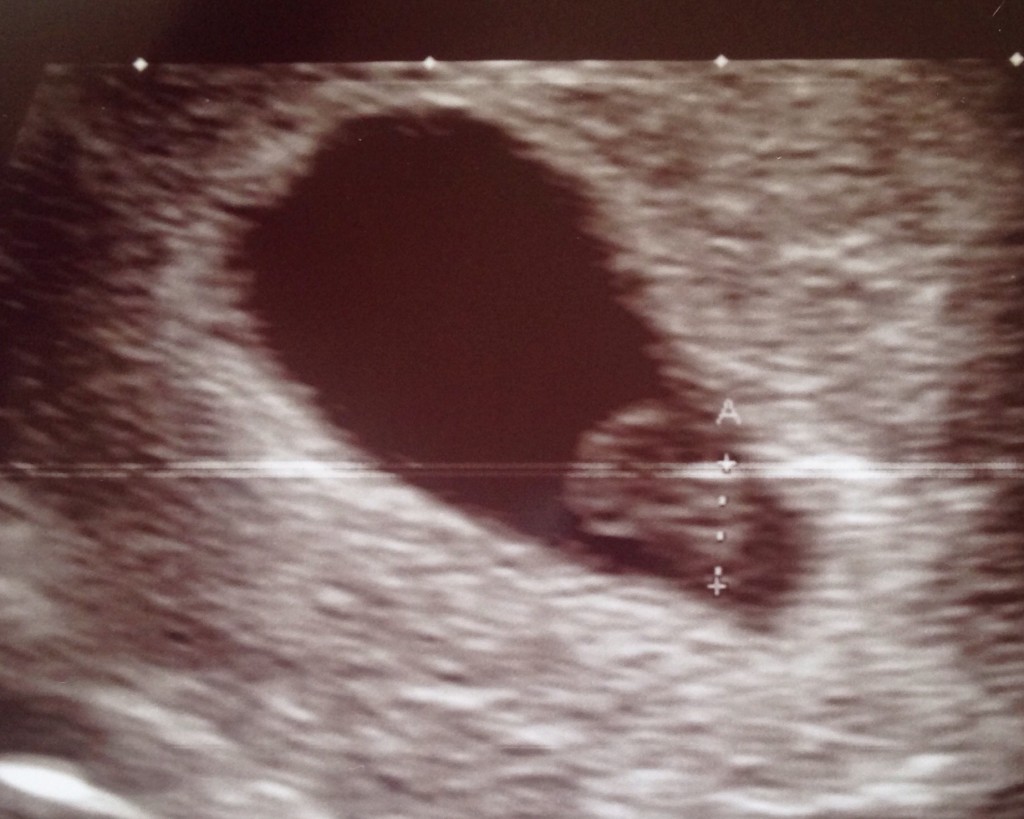 Our tiny bean at 6 weeks