One of my biggest frustrations as a teacher is the way that students shy away from a challenge. As soon as things start to get tough far too many of them give up.

I’ve lost counts of how many times I’ve discussed with my classes how they will find things difficult at times, but that is when you need to put that little bit more effort in.

Some of my pupils rise to the challenge so well I’m in awe of them but far too many shrug their shoulders and in their words “CBA”. (Can’t Be Arsed for those not to up to speed with teenage lingo!)

It’s one of the biggest concerns in our staffroom. Lovely, bright and intelligent kids who aren’t quite living up to their full potential because they don’t want to face up to the challenge, and with that the risk of failure.

I wish I knew what the answer was, I don’t know how to stop the fear of failure that seems ingrained in so many of our children. I hate seeing 11 year olds too worried to write down an answer in case it’s wrong.

How often do I challenge myself?

How often do I push myself out of my comfort zone? Where you get that feeling of panic and the adrenaline kicks in. Probably nowhere near as often as I should.

The last time I really challenged myself was over a year ago when I decided it would be a good idea to try and teach a class of Year 9’s how to knit in a week. Not one of my better ideas seeing as I didn’t know how to knit myself, but that was my challenge, and it kind of paid off. 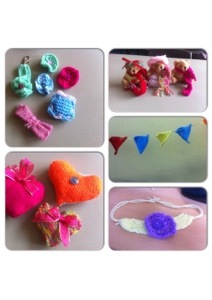 However, I have now set myself a huge challenge. For the past few months the weight has been creeping on and I’ve been feeling a bit sluggish and fed up with myself. I’m crap at dieting, I love my food too much, so if I’m going to lose weight the only thing that really works for me is exercise!

So, 5 weeks tomorrow I am taking part in a 12 mile obstacle course, Tough Mudder. I’m excited and slightly terrified at the same time. The furthest I’ve ever run is a 10km race which was a couple of months before I got pregnant with O.  The distance alone is a worry but throw in the obstacles (Sewage Outlet, Arctic Enema and Ladder To Hell to name just a few) and a whole lot of mud and I’m starting to think I’ve gone a little bit crazy!

I’m not concerned about times, it will be a huge achievement for me just to finish. The training has been going well (if we ignore the time I nearly cried in one session) and luckily I am part of a team so there will be some friendly faces helping me along the way.

Hubby is coming along to meet me at the finishing line with my little man and I know I’ll be so excited to see their faces. Oh, and I’ve been promised a slap up meal out and a fancy massage when I’m done. I think I’ll have earned them!