Can I let you into a little secret? Sometimes, at work, I can be a bit of a moaner.

And then because I’m moaning I get stressed.

My one New Years Resolution for this year was to be happy and to achieve this I need to stay a little bit more chilled out.

Not it’s easy to be chilled when you’re sat at home in your PJ’s, watching Frozen, with a glass of Baileys whilst stuffing your face with the leftover Christmas chocolate.

Being back at work this week has given me the opportunity to test out my new relaxed approach.

If you’ve ever worked in a school you will know nothing ever runs smoothly but my colleagues and I often joke that we must be on some sort of Truman Show reality TV where someone, somewhere is having a giggle seeing how much they can disrupt your day before you crack.

Over the past two days my little challenges have been:

The heating not working on the first day, which results in grumpy kids and even grumpier staff sat in classrooms with their coats and gloves on. As if the first day back after the holidays isn’t bad enough!

The remote control not working to turn on the whiteboard projector. This may not sound like too big a problem, but the classroom doesn’t have an “ordinary” whiteboard and all of my lesson is on the computer.

The only way to turn on the projector is to climb on the desks (in heels) and reach up to manually switch it on. Bad day to wear a dress seeing as I don’t particularly want to flash my knickers at a group of 15 year old boys!

Oh, but of course officially I’m not allowed to switch on the projector by climbing on desks as I haven’t the appropriate training (damn Health & Safety)

The staff toilet still without toilet paper despite running out during the last week before the Christmas holidays.

Getting locked in the afore mentioned toilet.  Maybe it’s just me, but if you were going to lock a toilet from the outside wouldn’t you check if anyone was inside it first!

No computers working in the sixth form block and all your lessons are planed on the computers!

And as there are no computers in the sixth form there is a free for all amongst the sixth form teachers about who can find one of the few free classrooms that has a working computer!

Throw in that we have no budget whatsoever for photocopying and textbooks that are literally falling apart at the seams. Seriously, one of mine is actually growing mould its that disgusting. Although it is amusing to watch the reaction of the poor kid who gets it for the lesson!

Nothing like a great start to a new year, is there?

Oh well, good job I have a cup of tea (in a closed mug for Health and Safety reasons, of course) and my owl pencil case to keep me smiling! 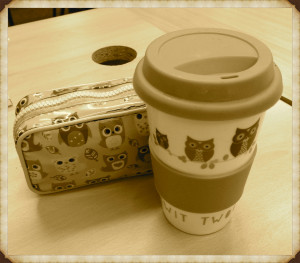 How’s it been for you being back at work? Hope it’s been a little smoother than mine!