My little man loves balls! This hasn’t been something we have pushed on him but has come completely from him. Even from being just a few months old he has loved playing with balls. 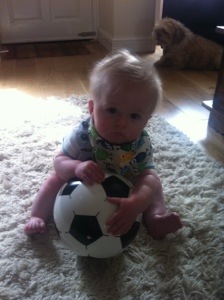 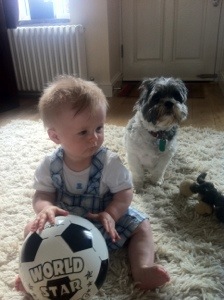 As he has got older his love for balls has only got stronger. Footballs, rugby balls, tennis balls, bouncy balls, beach balls. It really doesn’t matter, he will play with them for hours. 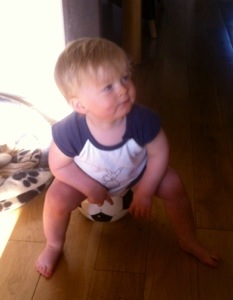 He loves to play catch, or bat and ball, but more than anything he loves to play football. With the gorgeous summer we have been having a large proportion of our time is spent having a kickabout with O. 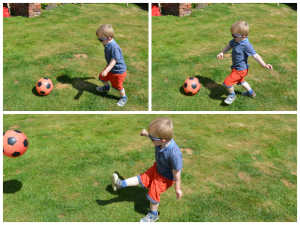 We also get a running commentary along with it, “Good one Daddy” or “That was rubbish Mummy” which always makes us laugh.

He loves to get everyone involved and plays football with all four grandparents, although their backs tend to feel it the next day.

He happily cheers himself for scoring an imaginary goal and is already a bit of an expert in the art of dramatic diving.

I foresee many years ahead of standing on a footie pitch sideline in the freezing cold watching my little boy do something that he loves, and I’ll be cheering him on during every game!