O loves a game of hide and seek.  It’s  one of his faves, but there is something you need to know.  He is the worst hide and seeker ever!  Honestly, he is!

His seeking skills aren’t great.  Whilst counting to ten he will have a sneaky peek from behind his hands (great big cheater) and despite this he can still miss seeing someone who is virtually in front of his face!

But it’s his hiding skills that are truly terrible!

He always chooses to hide in the place where he has just found someone.  Originality is not his forte, and he hasn’t quite grasped the concept that he has to hide the whole of himself rather than just his face.  If he can’t see us, we musn’t be able to see him.

Whilst he is being sought he will giggle away (loudly) whilst the other person is looking for him, a bit of a giveaway as to where he is, no matter how much I try to tell him hiding is the time to be as quiet as you possibly can!

And if all this still hasn’t resulted in him being found, when he hears the words “O, where are you?” (because you can’t play hide and seek with a 2 year old without having a running commentary on every detail) he pipes up “I’m here!” and then usually runs out from his hiding spot. 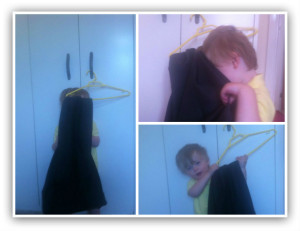 I love that the hasn’t quite grasped it.  It’s so sweet to hear his little giggle giving away where he is, and maybe he just wants to be found as quickly as possible!  It doesn’t matter that he isn’t the best hide and seeker because as long as we’re all laughing whilst we play it, that’s all that really matters.