As a family there is nothing we like more than eating out together and we are huge fans of Italian food.  I’ve written before how we have a bit of a tradition of Italian Sundays and when we were given the opportunity to review the newly refurbished Bella Italia in Didsbury it seemed only fitting that we should go on a Sunday.  My parents are huge Bella Italia fans but I have never been and was excited to see what it was they liked so much about the place.

We arrived 10 minutes late for our 4:30pm booking, but were still greeted warmly and shown to our booth (I love a booth, impressed straight away).  As a first timer to Bella Italia I was really impressed by the bright and colourful interior, and O was fascinated by the lights coming up from the side of the booth. My grandad would always judge a place by their toilets and I loved all the pictures that were on the walls in the bathroom. 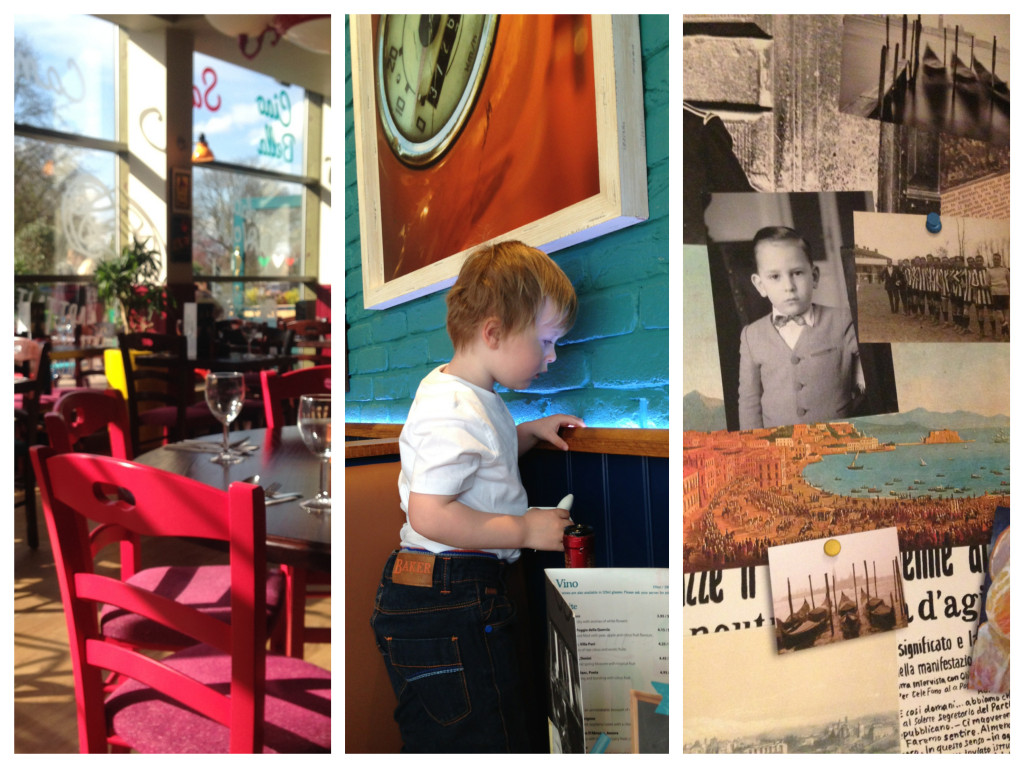 Once settled crayons and a colouring sheet were brought over for O by our very friendly waitress and menus for us. Great timing as it meant we got a little bit of peace to look at the menu. 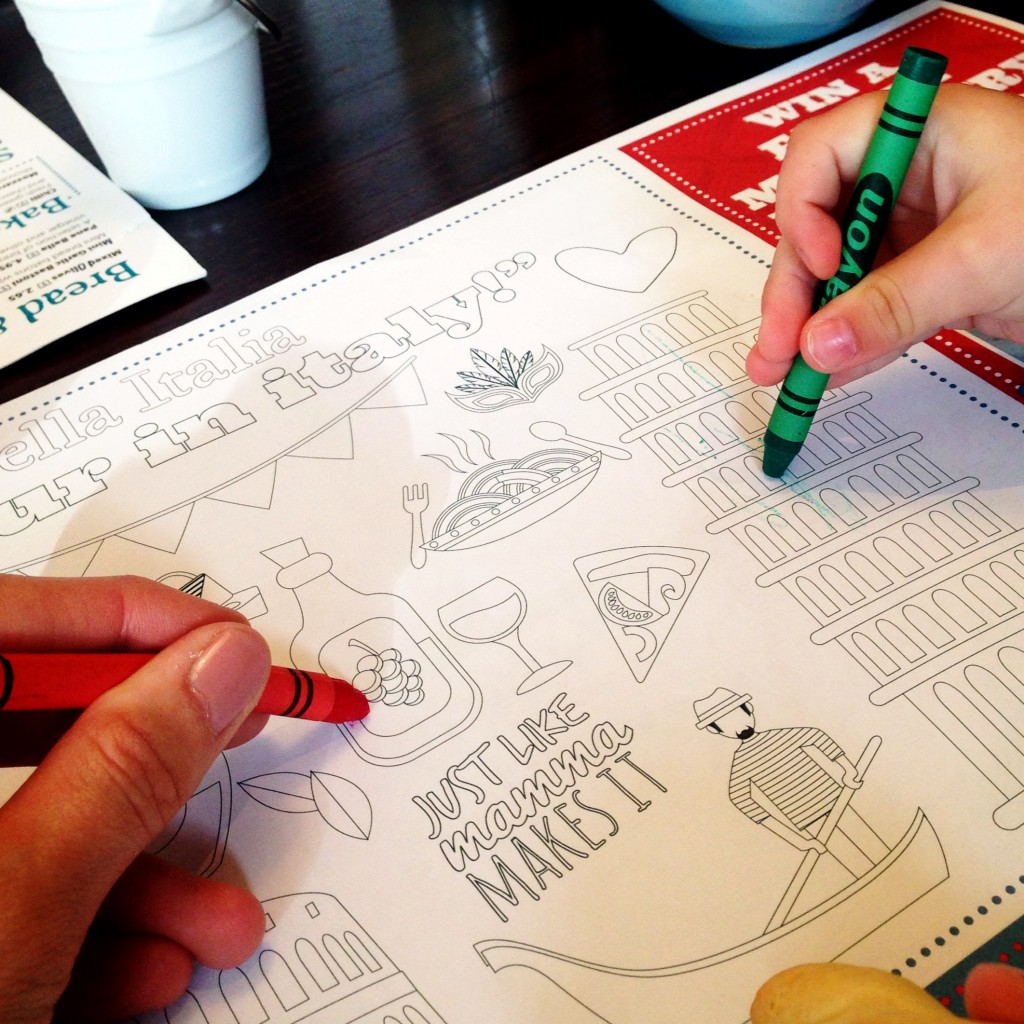 We ordered a couple of drinks whilst we were checking out the impressive menu.  A diet coke for me, a Peroni for hubby and a milk for O.  The children’s drinks are so beautifully presented in a mini milk bottle with a swirly straw (as O called it) which can be taken home after the meal. I later opted for a Bella Bellini, a malibu and strawberry liqueur topped with Prosecco which was amazing, and worth going back for alone. 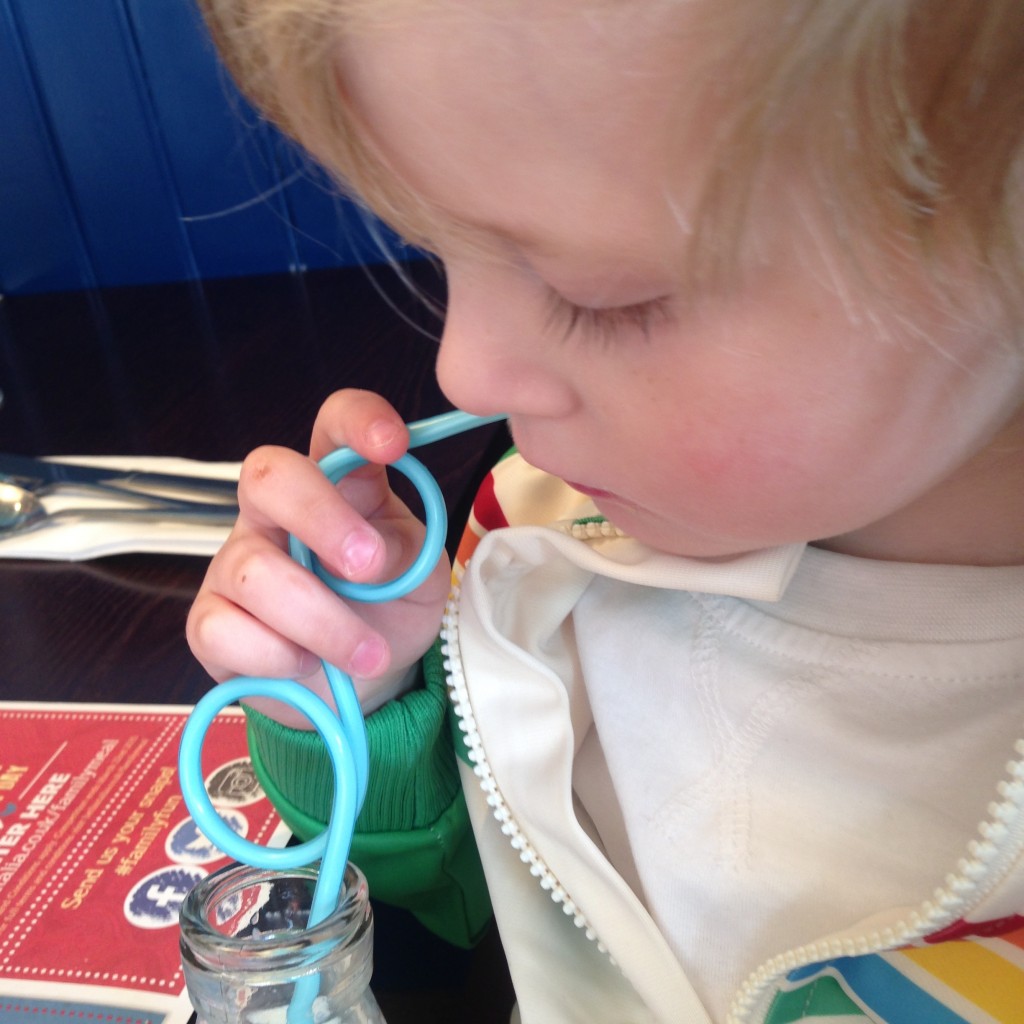 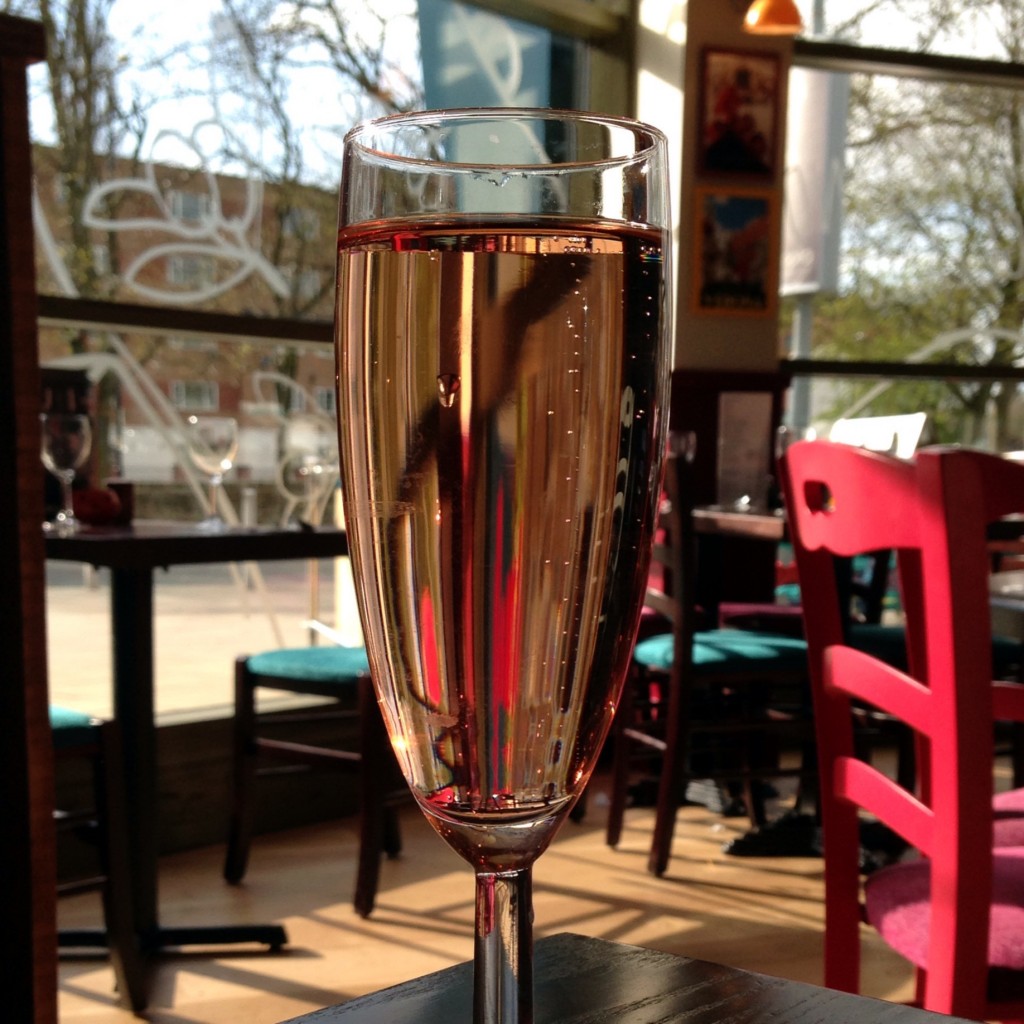 It’s a tradition when we eat out that hubby and I will share our starters half and half.  Over the years he has learnt this is the best way as it prevents me sulking from food envy so we ordered the Polpette and Funghi Arrosto to eat between us and ordered O a cheesy garlic bread.  I was really impressed by the size of the children’s portions as sometimes they can be a bit stingy.  I’m a bit fussy when it comes to meatballs as my husband makes the most amazing ones but these were delicious, probably the best I’ve had when we’ve been out and the mushrooms were yummy.  Both dishes came with a piece of toasted ciabatta to dip into the sauce. 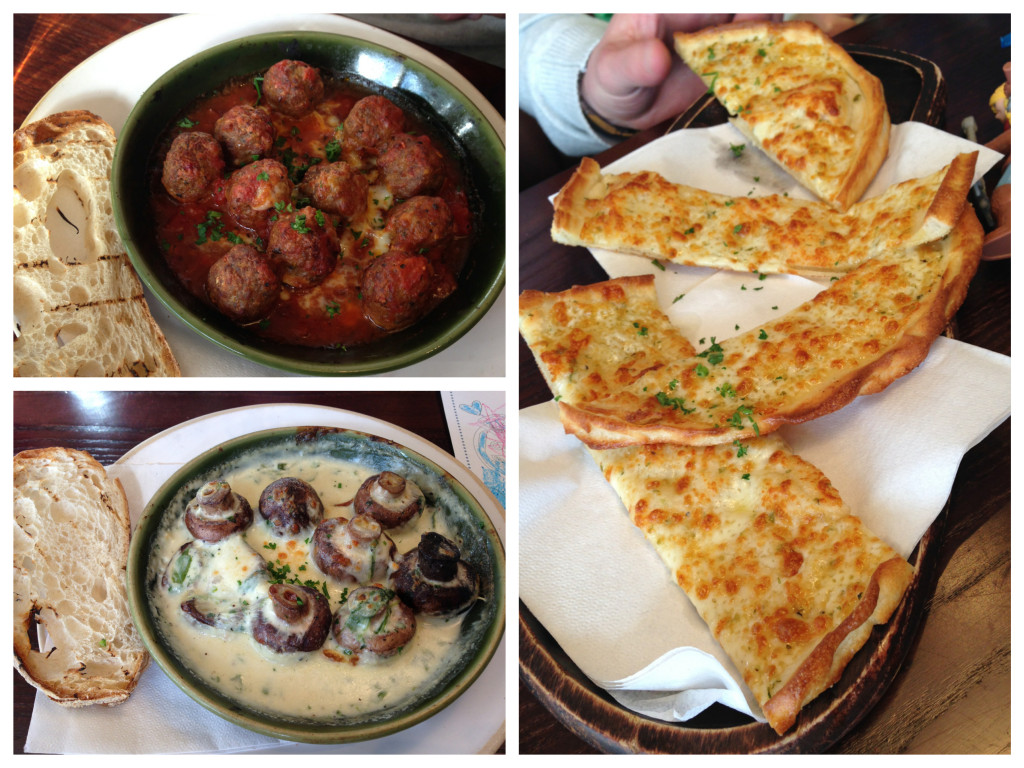 As a main course I ordered the Pollo O Spinaci calzone, I was worried it could be a bit bland but it was absolutely delicious and surprisingly light so I didn’t feel completely stuffed after it.  My husband went for the Surf and Turf with a side order of corn on the cob, and apart from two chips he chomped the lot so definitely a hit. 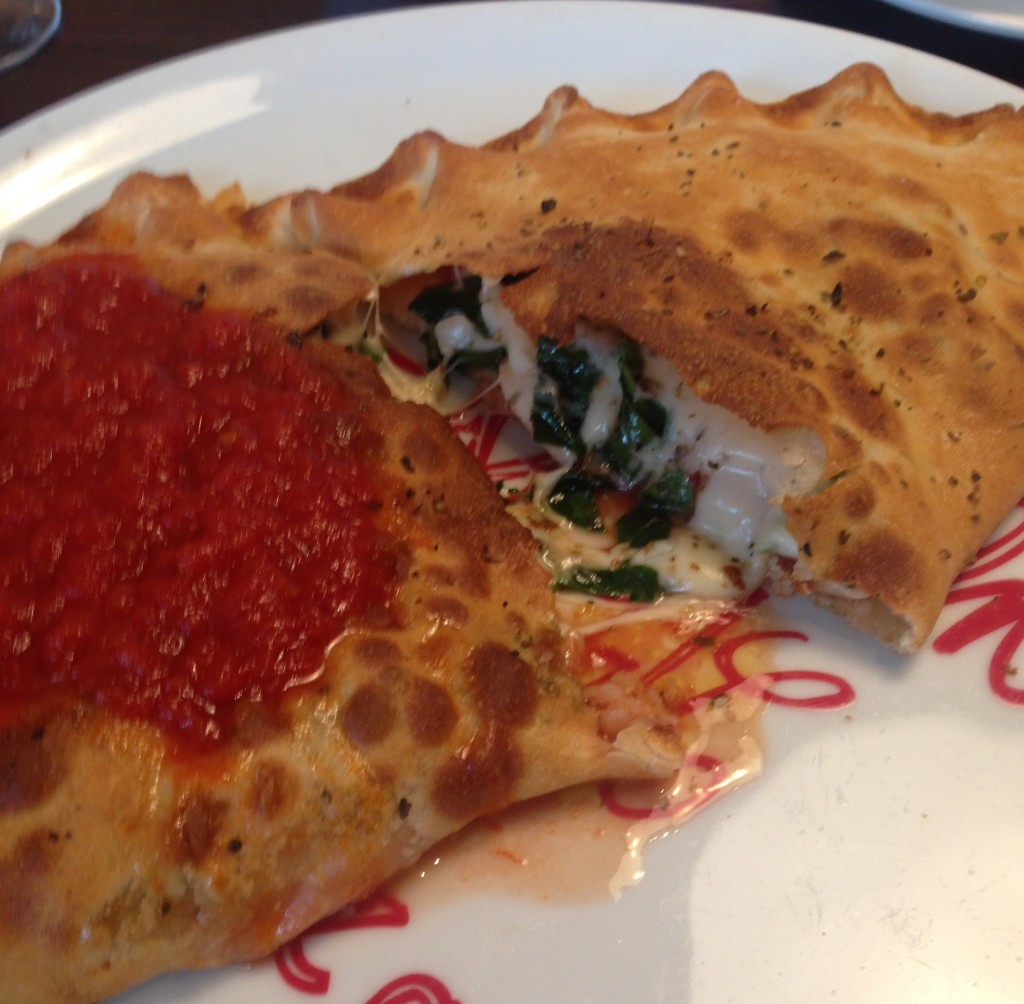 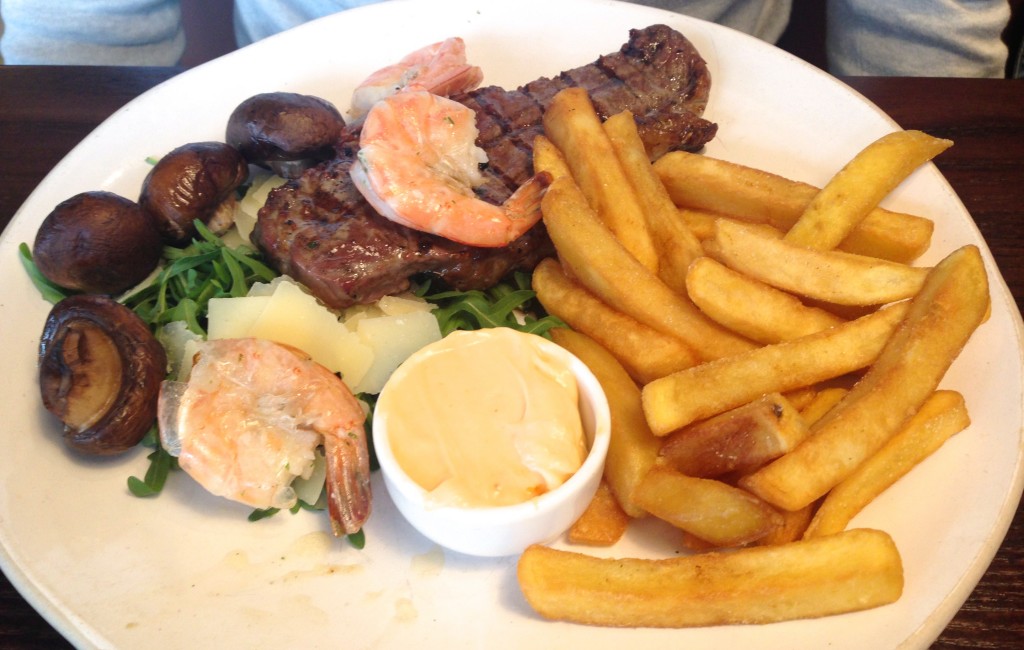 One thing I was really impressed with was the children’s menu, which has been awarded the Mumsnet Family Friendly Innovation Award 2014.  There are two tiers of kids menu, one for 2-6 year olds and one for ages 7-11.  One of my bugbears when eating out is paying £7 or £8 for a huge children’s meal that I know O won’t eat, so I often end up having to choose something for myself that I know I can give him bits off.  At Bella Italia O could have a three course meal, plus breadsticks and a drink, all for £5.45!

We ordered the plain buttered pasta for O as he is (usually) a huge pasta fan.  You can order it as spaghetti, tubes or animals and we opted for the animals.  At the moment he is going through a really fussy phase when it comes to food and when the dish was put in front of him he immediately complained he didn’t like it.  Without trying it, because we all know toddlers can decide they like something without ever tasting it.  Our waitress could not have been lovelier and offered to change the pasta for tubes, which arrived minutes later. 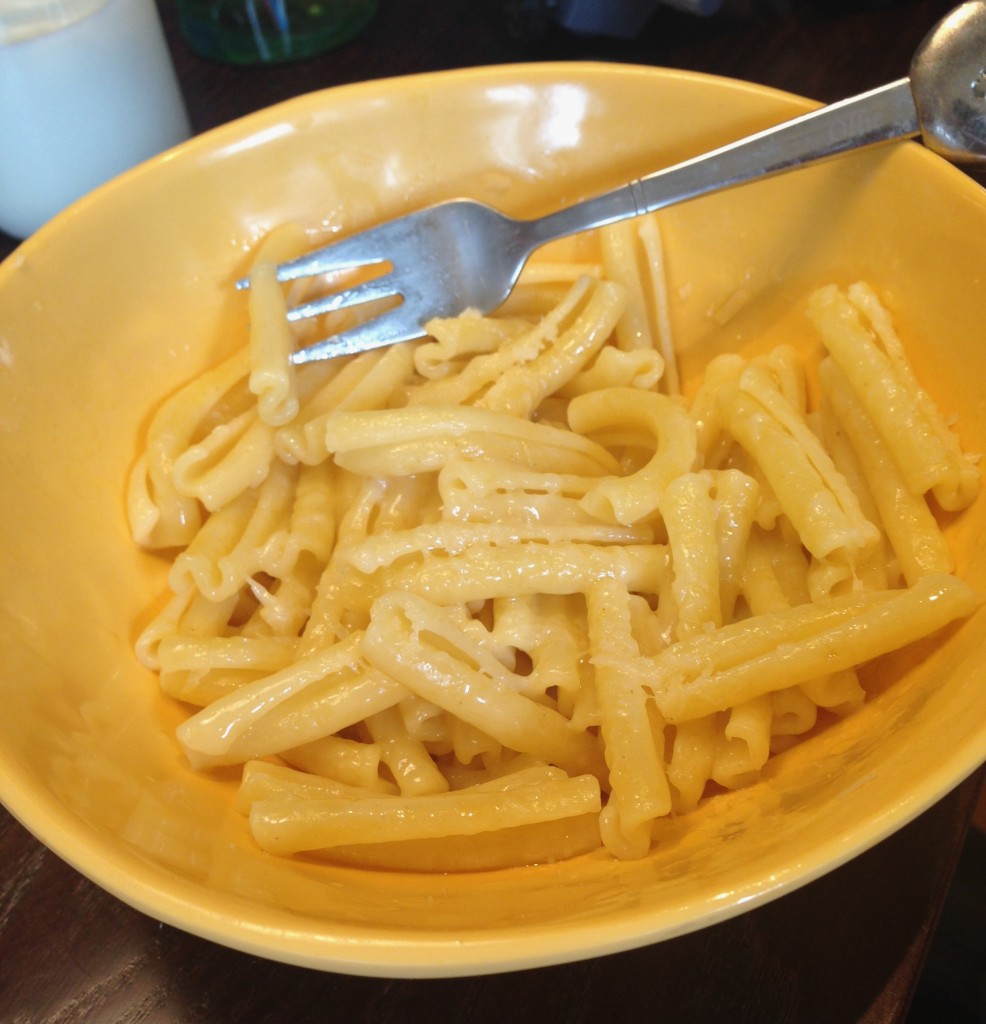 A really lovely touch was that the manager came over as he was concerned that O wasn’t liking his meal and offered to change it for a completely new one.  We declined as I knew once O had stopped being stroppy he would eat some of the pasta but we were really touched they were so thoughtful.

If I thought choosing a main course was difficult, it was nothing compared to choosing a dessert.   They all looked amazing.  I was really tempted with the Cookie Dough Lava Cake, but in the end we decided to share three shot desserts and a make your own gelati.  Hubby had spotted the bubblegum ice cream and wanted to try some.  O had some mini doughnuts with chocolate sauce.  The ice cream was gorgeous, but personally I wasn’t a huge fan of the shot desserts but I think that’s because I stupidly let hubby choose the flavours and they weren’t what I would have gone for.  Note to self:  pick my own flavours next time. 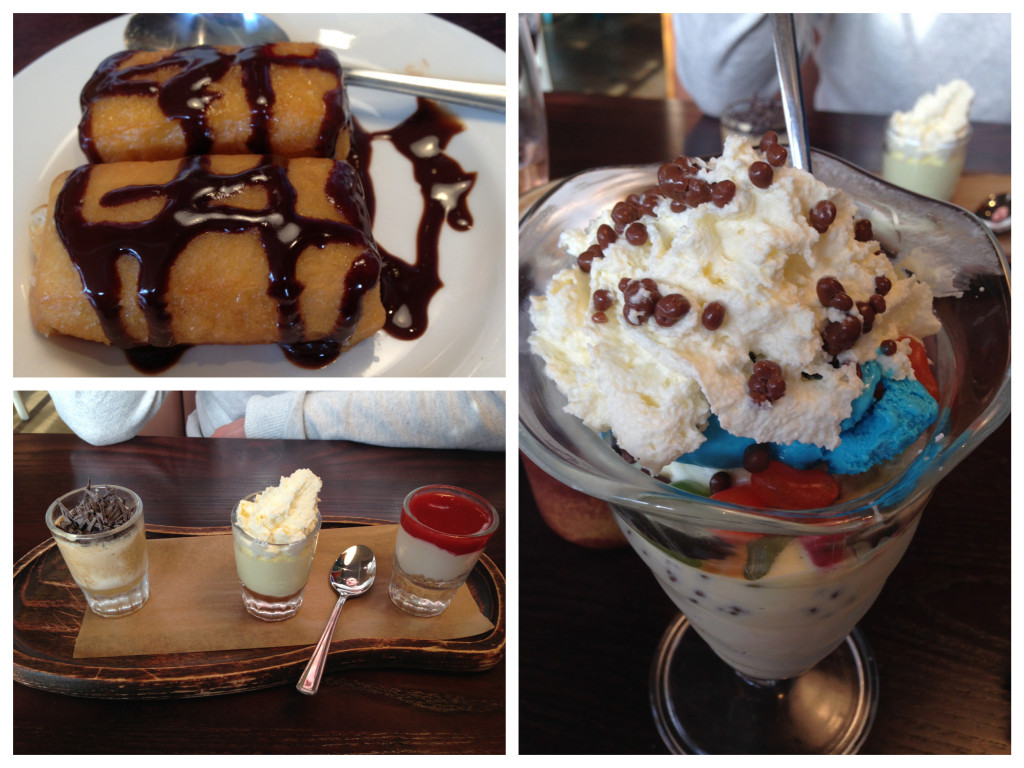 I’m not sure why we have never visited Bella Italia before but we will definitely be returning. The staff were fantastic, the menu choice is amazing (there are also gluten free and low calorie options), the food is tasty and was quickly served, a blessing when you’re eating with a toddler, and a grumpy one at that.

Disclosure: We were invited to dinner at Bella Italia free of charge for review purposes but all photos and opinions are my own.