Last week I was forced to take a little blogging break as our internet went down for a few days, so was unable to join in with last weeks little loves. So I’m going to combine the past 2 weeks worth of nice things and this is what we have been loving…

Read For the past 2 weeks O has asked for the same book for story time every night. Norman The Silly Slug! I do really like the book but every night! We had a bit of a break last night and read Peepo, lovely to have something different!

Watched With no internet we have been watching a fair bit of TV and last weekend saw the first time me and O sat down to watch a film together. Flicking through Sky moire I saw Wreck-It Ralph was on and as it is a cartoon I though O would quite like it too. We spent a lovely afternoon curled up on the couch watching it, fab film.

I also watched the series finale of The 100. It’s been okay, some good bits, but a bit slow in places and I was looking forward to seeing how it wrapped up. The last episode was so frustrating as it finished with more questions than answers, which I know sets up the next series but still. I’ve got to wait for the new year for that!

Heard After getting the internet back up and running I’ve been adding a few more songs to more Spotify account. This weeks I’ve been listening to Dire Straits Romeo and Juliet quite a lot. I love this song, even though it reminds me of quite a sad time when me and the hubster were on a break (long time ago, in my uni days).

Made For the past week to be honest I’ve been having some cooking disasters. Seriously, I’ve even managed to completely botch up a fried egg, but last night I made this recipe from Vicki over at Honest Mum and it was delicious, and so easy to make. I’m a huge fan of one lot cooking, as I’m usually the one who ends up washing up! 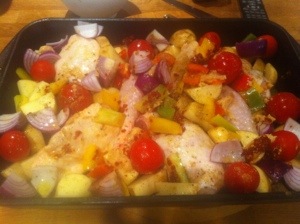 Wore I’ve been keeping up with the 30 day style challenge and have been enjoying wearing a few things that for far too long have been too small. After starting exercising more at the end of July I’ve lost almost 10 inches (9.75 to be exact) from around my tum, hips and bum so it’s nice to feel better in my clothes.

I did get to wear my lovely new dress from Warehouse (bought before the challenge started) to our friends little boys christening. I’d had my eye on it for ages so when it was reduced to £15 in the sale I snapped it up! 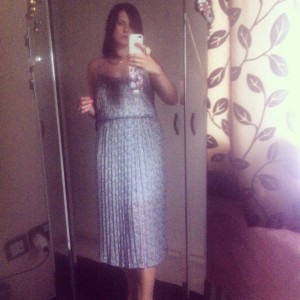 And lastly… This week saw Year 11 parents evening and it was one I’d been dreading. There’s a particularly awkward dad of one of my year 11 girls who seems to like putting us teachers on the spot. It was a huge bonus when it was his wife who sat down in front of me. And the rest of the parents were so lovely and supportive, although I think I may have a few grumpy teenage boys to deal with today!

Have a wonderful week and see you next Friday!