So that’s it, summer holidays virtually over. This is my last day off and I’m feeling a bit apprehensive about the return to work. It has been so wonderful to have spend the past few weeks with O and I’m gutted that it’s over.

On the up side hubby has been off again this week so we have been making the most of the time together and been out and about lots as a family and managed a sneaky night away just the two of us. The highlights have been.

Read On Tuesday I was this fortnights host for the Britmums Carnival and this meant I have spent the first part of this week reading all the fab posts that fellow bloggers had emailed in. Every post was wonderful and I’m so glad I offered to do it as I have found myself a couple of new blogs to read and also had some of my current favourites send my their posts too. If you’ve got a spare minute check it out as there are some great posts.

Watched O has discovered a new favourite TV programme so I’ve been semi-watching Team Oomizumi in a morning. He’s glued to it so I get 25 minutes to have a cup of tea in peace and catch up on a bit of blog reading.

Heard Not much music but hubby has talked non-stop about Man Utd’s new signing! I’m not sure if I’ve mention before but he is a HUGE Utd fan so he has been like a giddy kid all week (well until they lost 4-1 to Milton Keynes, but we won’t mention that). I can’t remember the lads name now. Bad wife, must pay more attention.

Made Lots of stewed apples. We have a few apple trees at the bottom of the garden and they are just starting to be ready so I’ve been stewing the first batch, ready for freezing, so they can be pulled out over the Winter and be used for crumbles. I was supposed to be making Apple and Cinnamon jam but that’s going to be a job for the weekend. 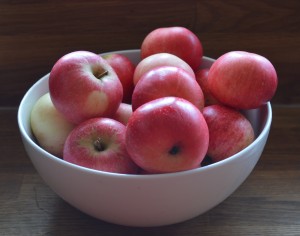 Wore A proper date night which gave me an excuse to put on my new Boden dress. Not the best picture but it is lovely! 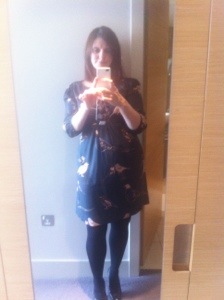 And with a bit of Autumn popping it’s head up I’ve been wearing my new tan brogues. I was really unsure if they were “me” or not and they have sat in the bag for a couple of weeks as I debated whether to return them. After wearing them earlier this week I’m now a little bit in love with them. Definite keepers.

And lastly…On Tuesday night we stayed over in Manchester and went out to one of our fave Italians for a meal. It was so lovely to spend a bit of couple time together, and as we are now officially past it we were tucked up back in bed by 9:30pm. 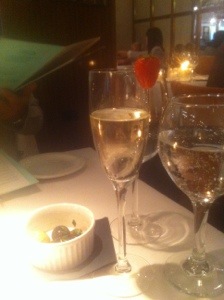