At the minute it feels like I have a much neglected little blog. This week has been slightly crazy and I’ve barely had the time to check in at all. Hubby has been down in London for the past 2 days, my Year 11’s, 12’s and 13’s have all had exams this week (so lots of last minute revision sessions) plus we’ve had the builders at home so we are living like vampires in the house of eternal darkness. Perfect timing just as the sun decides to show it’s face. Throw into the mix I’m in the middle of exam marking which takes up almost every spare minute and there’s not much time left for anything else. 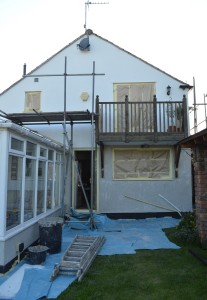 Nearly all my spare time has been spent with O so he may feature quite a bit in this weeks little loves.  Here we go:

Read I read our little chalkboard. Not something I usually do but I had a very special reason this week. My clever little boy wrote his name all by himself. Such a very proud mummy, and one of the benefits of him having a name that is largely made up of circles and lines! 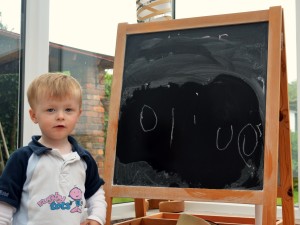 Watched I know I’ve mentioned this here before but after being away and already being behind I had the last three episodes of Revenge to catch up on. On Sunday afternoon I settled myself down for a Revenge-a-thon whilst the little man was sleeping and the big man had been sent to the supermarket. Oh my goodness gracious me, I was not disappointed. The last episode was fantastic and I’m already giddy for the start of series 4.

The other special moment I watched this week was O eventually kicking the ball over the posts at Rugbytots. Apart from a one off fluke he has never quite managed it before but every week he has been getting better and better and last Saturday he cleared the posts 3 times in a row. Another very proud mummy moment!  My little man amazes me a little bit more every week.

Heard Recently one of my fave radio stations (real radio) transferred over to Heart. I have to admit I’m not overly keen on the DJ’s but I am liking the music they’re playing so it’s keeping a slot on my car radio memory thingymajig! Driving home from work they played “Walking On Sunshine” One of my faves as a kid and particularly appropriate as the sun was beaming down. There may well have been a bit of tuneless singing along going on too!

Made Apart from dinner not much else. To try and make this section look not quite so pathetic I did make home made burgers and my own pasta sauce. Not fancy but made by my own fair hands!

Wore Jewellery! Generally, apart from my wedding and engagement ring I don’t tend to wear any jewellery at all, but I’ve treated myself to a couple of necklaces. I was a bit unsure whether I would wear them and was contemplating returning them, but then I wore the pink one last week and loved it. The other is a lot more blingy than anything I would normally wear but it looks really pretty on, just need to find an occasion to wear it. 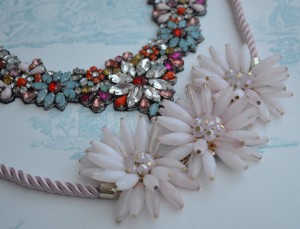 And lastly…I’m not entirely sure I’m loving this but I’ve been off this week to sign O up for pre-school, starting in January. I naively turned up with the mornings we’d planned to be told there were no morning sessions available whatsoever for the next academic year. There’s already a waiting list! I’ve got him booked in a couple of afternoons from Jan and reserved his morning places for September 2015!!

Finally, something that did make me smile. A gorgeous bunch of flowers from one my students who’s just left. Always nice to feel appreciated! 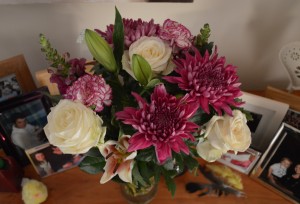 Have a lovely week and see you all next Friday!