Wow, how are we on week 17 already? It really feels like this year is flying by. This week we have been loving:

Read I love those posts that pop up on your FB that show text messaging gone wrong. Drives my husband mad as I sit on the couch laughing away to myself. One appeared this week and one in particular had me in a fit of giggles.

It went along the lines of:
Girl: Dad, there’s a moth outside the bathroom, can you please get rid of it?
Girl: Dad, please. It’s really scaring me!
Girl: Dad?
Girl: Dad?
Dad: Dad’s dead! This is the moth, you’re next!

So silly (and probably fake) but made me laugh. Something my dad would have done!

Watched After the other half falling asleep on the couch after a few too many beers on Sunday, and with there being very little else on TV that took my fancy I switched over to Fargo on channel 4. I wasn’t expecting too much from it so was pleasantly surprised to be hooked quite early on. Really looking forward to this Sundays episode.

Heard Nothing! O has got into the habit of magically appearing in our bed during the night, all documented by his sound monitor so although he does go back to sleep, he wakes us both up first. On Wednesday night hubby was away and O stayed in his bed until 7am and I heard nothing all night. Best sleep I’d had in ages!

Made Not a lot really! We did make some cupcakes on Sunday. Seeing as O isn’t a sweet tooth we didn’t bother decorating them as he doesn’t like icing and giving him hundreds and thousands on anything is tantamount to poison so they were plain vanilla sponge. (No photo as they really weren’t that pretty!)

Wore With the gorgeous weather we had last weekend I’ve been wearing my sunglasses a lot over the Easter bank holiday. Just like O I hate having the sun in my eyes!

And lastly…Last Friday was our annual Good Friday meal with a few of our friends. The numbers have increased over the years as more babies have come along but it is always so lovely to get together and see everyone and the kids. The weather was so gorgeous we all ate outside which was perfect for the kids as they could play whilst we kept any eye on them. O is the youngest but wants to join in with the others, and they were so good with him. Adorable to watch! 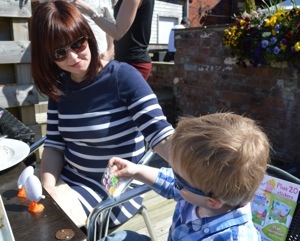 Apologies for the lack of photos this week, my laptop has been feeling poorly so the iPad has had to step in. Hoping it’s feeling better next week!