We’ve been having a lovely week so far, it really feels like Spring (and the warmer weather) is just around the corner and I can’t wait.  This is what we’ve been enjoying.

Read Mostly menus! We have been out twice for dinner in the last week and even managed a mid week takeaway so I have mostly been reading menus.  Not good for the figure (especially with hols in 9 weeks), but it has been gorgeous food.

Watched I’ve been watching The Widower on ITV on Monday night for the past 2 weeks and I’ve been hooked by it.  Really looking forward to the final installment next week!

Heard The best thing I heard this week was my little boy on our first proper telephone conversation.  He was staying over at Nana’s on Wednesday night, and I rang on way home to check he was okay.  He told me all about his day, something mumbled about sand and planting, whilst shouting Mummy down the phone every couple of mins!

Made A fool of myself! Does that count? On Thursday we had a family day out to Manchester and visited MOSI.  In the experiments section there is a dance mat game about recycling so me and the other half stepped up.  It took the first couple of minutes to figure out what we were doing and then it got competitive. In my eagerness to beat him I tried to step on one of the squares, at the same time as O jumped on the mat too.  O tripped and ended up under my feet, tripping me up too.  In my attempt to not land on him I ended up sprawled across the floor of the museum.  At least the other visitors had the good grace to look away as they sniggered! 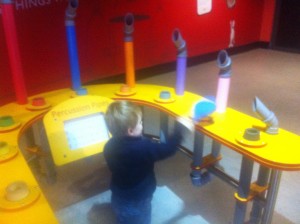 O enjoying himself after my MOSI dive. Ouch, my back!

Wore Don’t you just love it when you rediscover something in your wardrobe?  I bought a dress from White Stuff last year, wore it a couple of times and then it got put to the back of the closet.  One day last week I was having one of those “I have absolutely nothing to wear” moments and pulled it out in desperation. Teamed with a black long sleeve t-shirt, black tights and heels it took on a new lease of life and I’ll be wearing it lots more in the future.

And lastly…as mentioned above O had a night out on Wednesday which meant me and hubs had a night in.  The plan had been to go out but after a long day for both of us, we decided to go for a takeaway instead.  Usually it’s me that’s on pick up duty as someone has to be in for O, but as he wasn’t there we both went.  We ordered the takeaway, went for a drink and then picked up the food to come home.  It sounds silly as it’s something we used to do all the time, but it was so lovely to have the freedom to pop to the pub.  The lie in the next morning was fab too!