I may have mentioned this before but my little boy loves balls! He was kicking a football before he could walk, he’d shuffle round the floor on his bum kicking a ball as he went. As soon as he turned two we signed him up for Rugbytots for the following term as we thought it would be something he would love. We were right!

It’s the highlight of his week, especially as it’s his quality time with his Daddy. He had his third class last week and he’s making amazing progress (I know, I’m a bit biased but he is very good with a ball). Towards the end of the class the coach brings out a little pair of rugby posts and the toddlers have to try and kick a little rugby ball over. It’s too cute for words!

My boy is one of the youngest there and in the past two lessons he’s got nowhere close to getting the ball up and over. This week on his first couple of attempts he hit the middle bar. This in itself was a massive improvement, but on his third kick my little man managed to kick his ball over the posts. I couldn’t control myself, I was jumping off my bench, arms in the air and shouting as if he’d just won an Olympic gold. Proud mum moment or what?? 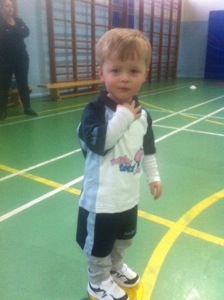