A year ago today O went to his first wedding…

One of the best things about being a teacher is that when you’re invited to a wedding on a random Tuesday in the middle of August you can agree to go without worrying about how to get the time off work. Unfortunately the same can’t be said for the Big Mr, but it seemed a lovely way for me and O to spend some quality time with my family.  The plan was that we would camp for two nights with my brother and his family in the Cotswolds, whilst the grandparents stayed in the posh hotel down the road. Lovely!

As the time got closer the realities of camping with a not quite 2 year old, on my own, whilst preparing for a wedding started to, quite frankly, terrify me. So I have to admit, I chickened out and booked us into a lovely B&B for the night before the wedding so we would only need one night under the stars.

A fairly uneventful journey and a few hours later we pulled up in the beautiful village of Bibury. It is quite honestly one of the most gorgeous places I’ve even been and we stayed in one of the lovely rooms at the Catherine Wheel pub.  By this point O was not happy after spending three hours sat in a car so wasn’t overjoyed at having to sit in his highchair for dinner.

Luckily I had what used to be my secret weapon. When all else fails, get out the balloons. Even better, punch balloons. My G&T was taken out in one expert hit and sent sliding across the table, thanks O! Drink replaced and all drinks cleared off the table to allow balloon punching space. Second G&T fell off the slanted windowsill Nana had though it would be a good idea to place it on. The third G&T was knocked over by my brother passing a plate, and my dads face was a picture. Pretty sure he thought we were doing it just to wind him up. As if I’d waste one (let alone 3 gins) on winding him up! After 3 G&T’s, I’d only managed 2 sips it was obviously not meant to be!

A rushed dinner and it was time the kid and I took ourselves off to bed. Now my little man is a sleepy wriggler. Fine when he was in the confines of his cot, but when sharing a double bed with his mum, not so great. We managed the night with only one head first dive off the side (shhh, don’t tell Daddy), so I’d say a success.

On the wedding day O was up and dressed in his new outfit (and he did look cute), me in my fanciest frock and we were ready to go. The thing with toddlers is they won’t sit still for long, especially if there is nothing going on. We were ushered into the church minutes after arriving, and thought “Great, perfect timing”. But no, half an hour later we were still sitting there and O was getting bored. In the bride came, looking beautiful and the ceremony began. On reaching the point where the vicar asks for any reason why the couple may not be married O chose that moment to shout “More bic bic!”

Bless the vicar for seeing the humour and replying “Unfortunately, I can’t take that as a valid reason”. As the couple said there loving vows O wanted to be off so a quick exit was needed, just in time for the rain to arrive. Sat outside, in the rain, with a stroppy toddler was not how I had pictured the day.

The day went from bad to worse. O refused to sit in his high chair at the wedding breakfast, refused to eat, wanted to be picked up, but when he was squirmed to be put down, shouted through the speeches, ran away when taken outside, and generally drove me potty! Defintely not the cute little wedding date I’d imagined when we had the invite.

Eventually he started to lose some of the energy, the signal it was time for bed. So while the other guests partied away we headed for our tent and tucked ourselves in. As my little man snuggled into me to sleep, the stress of the day started to melt away, especially when my brother brought me a glass of wine and hog roast bap to enjoy. Big brothers have got to be useful for something.

Admittedly toddlers can look very sweet at weddings, but next time I’m leaving mine at home.

Happy 1st Wedding Anniversary to my cousin and his wife! 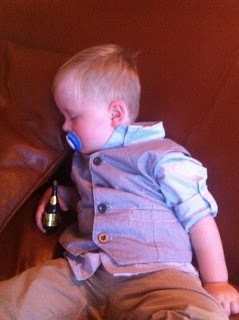