The mistakes we make…

When you first become a mum you know you’re not going to know it all and are bound to make some mistakes along the way. But the older my little boy gets the less I feel I know about the whole mummy world, and I’m making more mistakes than ever.

The most recent one being this week. My mum gave me a leaflet advertising brunch with Peppa and George for this Thursday. Okay, not where I’d ideally like to be spending my day off but I knew my little man would love it so planned to go, and told him we were going (another rookie error). A more experienced mum would have known this sort of thing sells out quickly, so when I phoned up on Wednesday afternoon to book a place (stop laughing, I realise now how stupid this was) of course it was fully booked. Epic fail on the Peppa front, especially when O was expecting to meet his favourite two pigs. 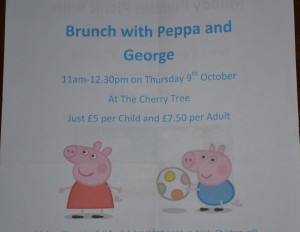 I should have known better after being as stupidly naïve when it came to booking his pre-school place. We had our little plan about which days he would go and arranged pick ups and drop offs with the grandparents so we were all organised (by the way he doesn’t start until January), and off I went to meet the manageress in June.  Surely, 7 months in advance in long enough?

Well, apparently not.  There were no morning sessions available at all and all our plans fell apart as I booked him into two of the few remaining places.  I later found out a second time mum friend had had her 2 year old booked in for months!  She knew the score and wasn’t going to fall into the rookie mum trap.

My other rookie mum mistakes include:

Being the only mum to send their kid into nursery in fancy dress on the fancy dress day!  As I dropped him off in a full on spider costume I soon realised it wasn’t the done thing.  Luckily he was too young to notice! 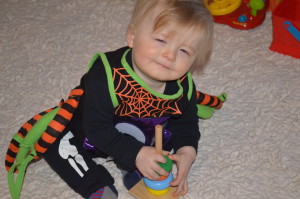 Spending far too much time stressing about the fact O would only eat Ella’s Kitchen pouches for about 2 months.  I had visions of him taking them to primary school in his lunch box as he refused anything else.  Obviously second, third (or more) time mums know this is a phase, but as a first timer it was terrifying.

Thinking M&S sell Christening outfits all year round!  Nope, only in summer (because who would be crazy enough to christen their child in an Autumn or Winter month!!).  I’d picked the outfit I wanted O to have months in advance but as he was a very little man in his first year I put off buying it to make sure I had the right size.  On the day I went to buy it in late August there were no christening outfits to be seen.  After having a mini melt-down I found a sales assistant who directed me to a rail of about 8 outfits hidden behind the new Autumn range.  Luckily they had his size, but it was a very hairy moment! 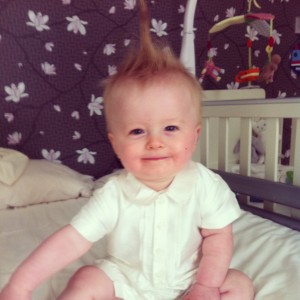 I’m sure there will be lots more rookie mum mistakes made in the next few years as we start to think about primary schools and the whole friendship/other mum etiquette that comes with it.  No wonder mums enjoy a glass (or 8) of wine!

And just to make myself feel better that I’m not the only one to make rookie mistakes:
A few years ago a good friend of mine told me about a little piece of advice she’d been given as her daughter was about to start primary school, “make sure you get the tights early”. Of course, she ignored this and come the last week in August she couldn’t find grey school tights for a 4 year old for love nor money. A classic rookie mum mistake.

What are your rookie mum mistakes?  I’d love to hear about them!