Up until now I’ve generally been quite laid back when it comes to things O related. I’ve never been one to wrap him up in cotton wool or sterilise everything he comes into contact with and it’s worked for us.

As he gets older I’m starting to realise I will have less and less control over keeping my little boy safe, and to be honest, it scares the bejesus out of me.

It all started with a trip to a new playground.

As we walked round I realised that none of the slides (my little boys favourite) had steps. The only way you could get to the top of the slide was by climbing. My first reaction was huge disappointment because O wouldn’t be able to reach them without my help, and if there’s one thing O loves it’s being independent!

As I looked around I saw the other kids, all around his age, were climbing up. So of course, I showed my little boy how he could climb up himself. Half of me felt huge pride at how quickly he picked it up, the other half was terrified at the thought of him slipping and hurting himself so I hovered around him like an annoying (and very big) bee! 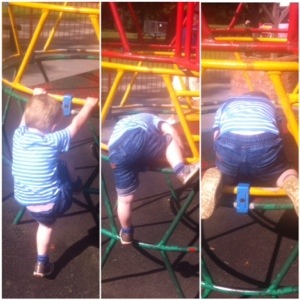 Then we saw this! And okay, this one did have steps! 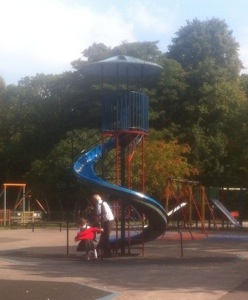 A slide I know I would have loved as a kid, but as a mum it made me want to weep. As my 2 year old eyed it up, I quickly told him he was too little for the big slide. But was he? There were toddlers (some obviously younger than him) climbing to the top and happily sliding down.

Reluctantly I agreed to letting him have a go (yes, that little man can wrap me round his little finger). He carefully climbed to the top, sat down and slid his way to the bottom, with my heart in my mouth the entire time.

Off he climbed again, only this time he grabbed the handrail before sitting his bum down. The result being he was left hanging at the top and was too scared to let go and slide. Tears ran down his face and he called for Mummy.

I wanted to get to him, I wanted to run up the steps, wrap him up in my arms and keep him safe, but another parent was stood halfway up and there was no way of me getting past. Tears pricked my eyes as panic set in.

The only thing I could do was try and talk him through it. Feet down, stand up, sit and slide. It sounds silly looking back now, but at the time I felt so helpless and so scared for my tiny man. He did listen, and he managed to get down. Walking over to me with a sheepish smile on his face, “I did it, Mummy”.  Before running off to do it all over again.

Those couple of minutes on the park represented the future of our relationship. I need to learn to let go and let him try things for himself.  I can’t always do it for him, but when I can’t, I’ll be there, somewhere nearby, talking him through it step by step.