With two weeks to go until Christmas Mummy thought it was about time she got her arse in gear and hit the shops. Stupidly, she thought it would be a good idea to take me with her. Haha, I think we all know how wrong she was.

She thought she’d been clever.  She thought she’d timed the trip to town to coincide with my nap so I’d sleep in the buggy. Not a chance. The ten minute power nap in the car was all I needed, I was ready to hit the shops.

To lull Mummy into a false sense of security I happily let her strap me in the buggy and off we went. I even sat nicely whilst we were in the first shop she went in, but Mummy really was pushing her luck trying to go into a second.

What she needs to realise is, I don’t like clothes shops! All the skirts and jumpers hit me in the face as Mummy tries to avoid running into the other crazed Christmas shoppers with my buggy. I do try to dodge the clothes by grabbing a sleeve and pulling as hard as I possibly can, before shouting words that no other human can interpret and thrashing around in my seat.  Mummy musn’t be able to hear me over all the Christmas music the shops are playing, so I shout even louder!

It must have worked because Mummy put back the lovely blazer and dress she’d picked up and exited the shop at top speed. Yay, result for me. Then Mummy makes another classic mistake of asking if I want to get out of my buggy. Of course I do, and now she’s put it on the table she can’t take it back. I’m out and free!

Free to walk at a snails pace and get in the way of everybody else shopping who all tut at Mummy and shake their heads. I don’t care about that though because I’ve found a new game to play. I need to touch every big white post we pass in the shopping centre, with both hands. Not sure why, but it really is fun. It also means I couldn’t possibly hold Mummy’s hand. I don’t think Mummy is joining in the game though, she’s too busy apologising to people who keep getting in my way.

When the posts run out, I’ve decided I don’t want to walk anymore, but there’s no way I’m going back in my buggy. That’s boring, Mummy has a spare hand, she can carry me. I spy a fellow two year old with her Mummy and we share a knowing look. She’s out of her buggy too and her Mummy looks as fed up as mine.

We’ve only been shopping for 25 minutes and Mummy is already heading back to the car, she’s not even bought anything. That was a bit silly of her coming to town if she wasn’t going to do any shopping. She must agree with me that she’s been silly as she isn’t looking very happy.

It’s nice to be back in the car, all comfy. So comfy I think I might have a little snooze, all that shopping has worn me out! 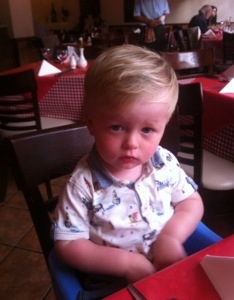 If she’s not dragging me round the shops, she’s forcing me to eat in “nice” places. I want a McDonalds!!